Artists concerned with the issues of African diaspora very often focus on the reassessment of the past, or re-writing history and filling in its gaps. Kapwani Kiwanga, a Canadian artist working in France, is looking into the future.

The artist’s research-based approach uses the narratives of colonial struggle and processes of de-colonisation in order create imaginary scenarios. In some of her earlier works, such as AFROGALACTICA: A brief history of the future, the artist forms ideas about the development of the United States of Africa Space Agency and its role in the future.

In her latest piece, Soft Measures exhibited at the Tramway, she takes up one fact; that the continent of Europe is moving towards Africa approximately two centimetres a year. The process of moving a whole continent will take up several million years, but eventually, Europe will be thrust beneath Africa, and with it its whole cultural heritage.

The main installation in gallery 1 at the Tramway consists of two curtains suspended from a sinuous ring attached to the ceiling. Crossing the room, a visual parallel is noticeable between the shape of the railing, the shapes made by the curtains and the gallery’s markings on the floor, reminding the visitors of its industrial past. 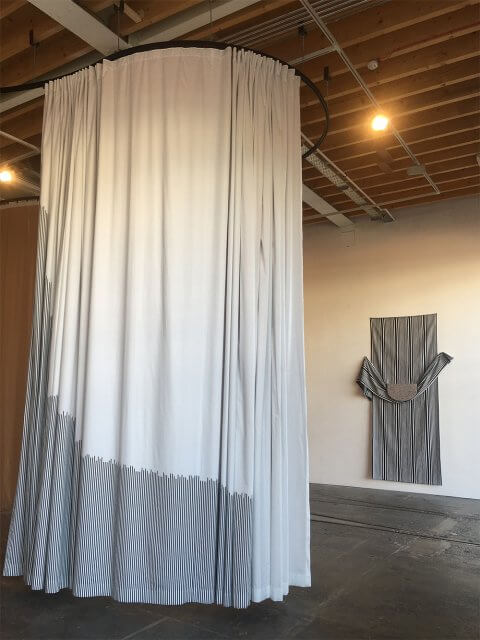 Right after I enter the room, the gallery assistant moves the curtains, so they extend to their maximum width. Standing between them is like standing in the space where a subduction zone is forming, which boundaries will eventually cause a collision between two tectonic plates.

On the gallery’s walls, patterned textiles hang vertically, with horizontal stripes of the same type of textile running across it, and rocks hanging onto them. The force of gravity is pulling them down, as the horizontal stripes of fabric are only supported by hooks, and surely if the exhibition lasted longer, they would eventually fall down. The slow, actually non-observable to a human eye process hints back at the statistical information about Europe moving towards the African continent. 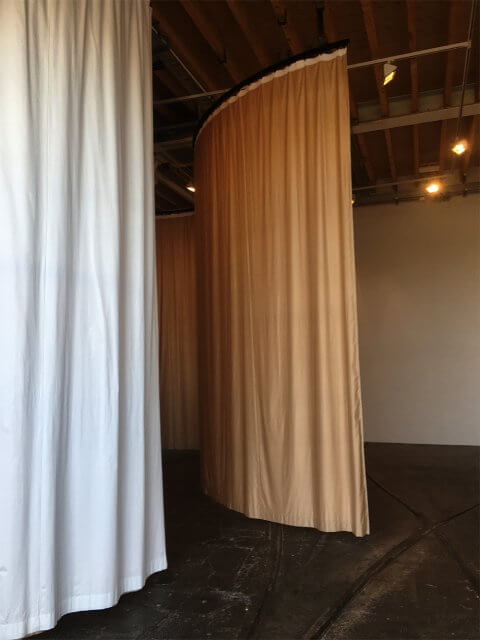 The exhibition leaves me with a feeling of uncertainty, the austerity of the display sharply pinpoints to the complexity of the issue, a clash between two continents. Kiwanga’s installation pinpoints to the paradox of how we moved away from each other within last few years, and how unknowingly and inevitably we are physically getting closer and closer.