The Boy is Back in Town

Bonn lost its most famous son to the allure of Vienna. Now Bonn is taking him back.

Ludwig van Beethoven (1770-1827) was born in Bonn and spent the first 22 years of his life there. A child prodigy (he played the organ at morning mass aged ten and published his first piano sonatas at twelve), he went on to become the foremost European classical musician of his time and today is the world’s most performed composer.

With Beethoven widely associated with Vienna, where he headed in search of fame and fortune in what was then Europe’s preeminent classical music centre, his home town is reminding the world of his origins with a year-long programme celebrating the 250th anniversary of his birth. The former federal capital of West Germany at the heart of the romantic Rhine Valley hopes to redefine itself as “Beethoven city”.

With a €40 million Euro budget, the programme, entitled BTHVN 2020 (the composer himself used the abbreviation as his signature) comprises a thousand individual events, including a musical river cruise, an open air concert with a live simultaneous broadcast linking it with the opening of Beethoven celebrations in Vienna, a series of music picnics in the grounds of regional castles and the synth-rock band Kraftwerk in their only German concert this year.

At the heart of the programme is the most extensive exhibition ever staged of Beethoven’s life, work and times, tracing the key phases of his musical output and the events which formed the backdrop to his life. Hosted by the Kunsthalle (Art Hall), the exhibition sets out to challenge the diffuse and often misunderstood public perception of him as a person and present him “in the round”.

Running until Apr 26, Beethoven: World. Citizen. Music. is a once in a lifetime opportunity to see a nuanced and multi-faceted presentation of the composer through some 250 objects, including personal documents rarely or never before seen in public, original manuscripts, historical musical instruments, costumes and portraits. Presented in cooperation with the Beethoven-Haus, the composer’s birthplace, the exhibition is presented in three sections:

“World” sheds light on the political and social situation around 1800, a turbulent period in Europe, when Napoleon embroiled the continent in war and whose defeat marked the beginning of the modern age.

“Citizen” examines Beethoven’s position in a society undergoing dramatic change, in particular the perception of him as the first ‘freelance’ composer. (In Vienna he introduced the practice of dedicating works to individuals, who paid for the honour.)

“Music” focuses on Beethoven the composer and invites visitors to hear choice examples of his key works at listening stations or install themselves in ‘emoti-chairs’ which translate sounds into vibrations to convey an impression of how he may have perceived music despite his deafness. 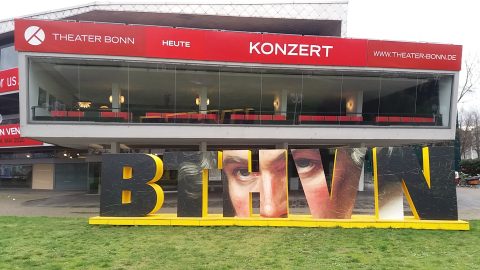 Exhibition highlights include: a roomful of original manuscripts, notably that for the ‘Eroica’ showing the tear where Beethoven angrily deleted the dedication to Napoleon upon hearing that the French leader had had himself crowned Emperor (up to that point Beethoven had extolled the virtues of the French revolution of liberty, equality and brotherhood); the so-called Heiligenstadt Testament, in which he hints at suicide due to hearing loss; the Joseph Stieler portrait of 1820, which has attained iconic status (as well as Beethoven’s own favourite, an 1818 pencil drawing by August von Kloeber showing the hint of a smile); and the original post mortem report indicating as the cause of death cirrhosis of the liver (Beethoven being a heavy drinker).

Other artefacts touch on the artistic backdrop to Beethoven’s life.

A print cycle of 82 etchings by the Spanish artist Francisco de Goya depicts atrocities committed by the occupying French forces. On loan from the Prado in Madrid, they are so graphic that they are displayed in a private booth where minors are discouraged.

A series of five large scale paintings by the Viennese artist Josef Maria Auchentaller (1865-1949), commissioned by a wealthy family for their music room, interprets the themes of the movements of Beethoven’s Sixth Symphony (the ‘Pastoral’), which describes the relationship between man and nature.

The final room contains a full size replica of Gustav Klimt’s ‘Beethoven Frieze’. Created for the 1902 Vienna Secession as an homage to Beethoven and based on Richard Wagner’s interpretation of Beethoven’s Ninth Symphony, the original, which is permanently housed in Vienna’s Secession building, is hailed as one of the crowning achievements of the Viennese Art Nouveau.

Later this year Max Klinger’s monumental Beethoven sculpture will be on display at the Kunsthalle (Sep 4-Jan 3, 2021) on loan from the Museum of Fine Arts in Leipzig. Also created for the 1902 Vienna Secession, it depicts Beethoven as an Olympic deity seated on a throne.

And that common image of him as a dour, grim-faced individual? Well, you wouldn’t look too happy either if, as he did, you spent four sessions covered in plaster with straws up your nose to breathe through while having your likeness taken for a bust. This would become the enduring picture of him. On display is the resulting life mask, which even shows scarring from childhood smallpox.

Directly opposite the Kunsthalle on Bonn’s Museum Mile, the Kunstmuseum (Art Museum) shows 20th and 21st century art. The special exhibition as part of the Beethoven anniversary is Sound and Silence (Jun 16-Nov 1), which examines how contemporary art makes silence both visible and audible. The selection by 50 international artists will include installation, performance, video, film, photography and drawing.

A two-hour Beethoven Walking Tour of sites associated with his early life, including his birthplace, the church where he was baptised (the font is still there), the site of the inn where he celebrated his farewell before leaving for Vienna and the monumental statue of him in the Münsterplatz depicting him with pen in hand looking to the heavens for inspiration. Liszt and Schumann helped in the effort to have it installed and Queen Victoria was among the dignitaries at the unveiling.

A CD of new music performed by the extraordinary pianist Susanne Kessel, who invited composers from all over the world to write short, Beethoven-inspired works for her unique compilation, 250 Piano Pieces for Beethoven.

A visit to the Beethoven-Haus, where he was born. A World Heritage Site, it houses the world’s biggest Beethoven collection and is one of the most visited music museums anywhere. The permanent display has been completely reconfigured, creating more exhibition space and a performance room for recitals.

A range of special merchandise, including Beethoven beer, chocolate, wine, t-shirts and a host of memorabilia items.

For further information about Bonn and travel to Germany, go to www.germany.travel/en/towns-cities-culture/towns-cities/bonn