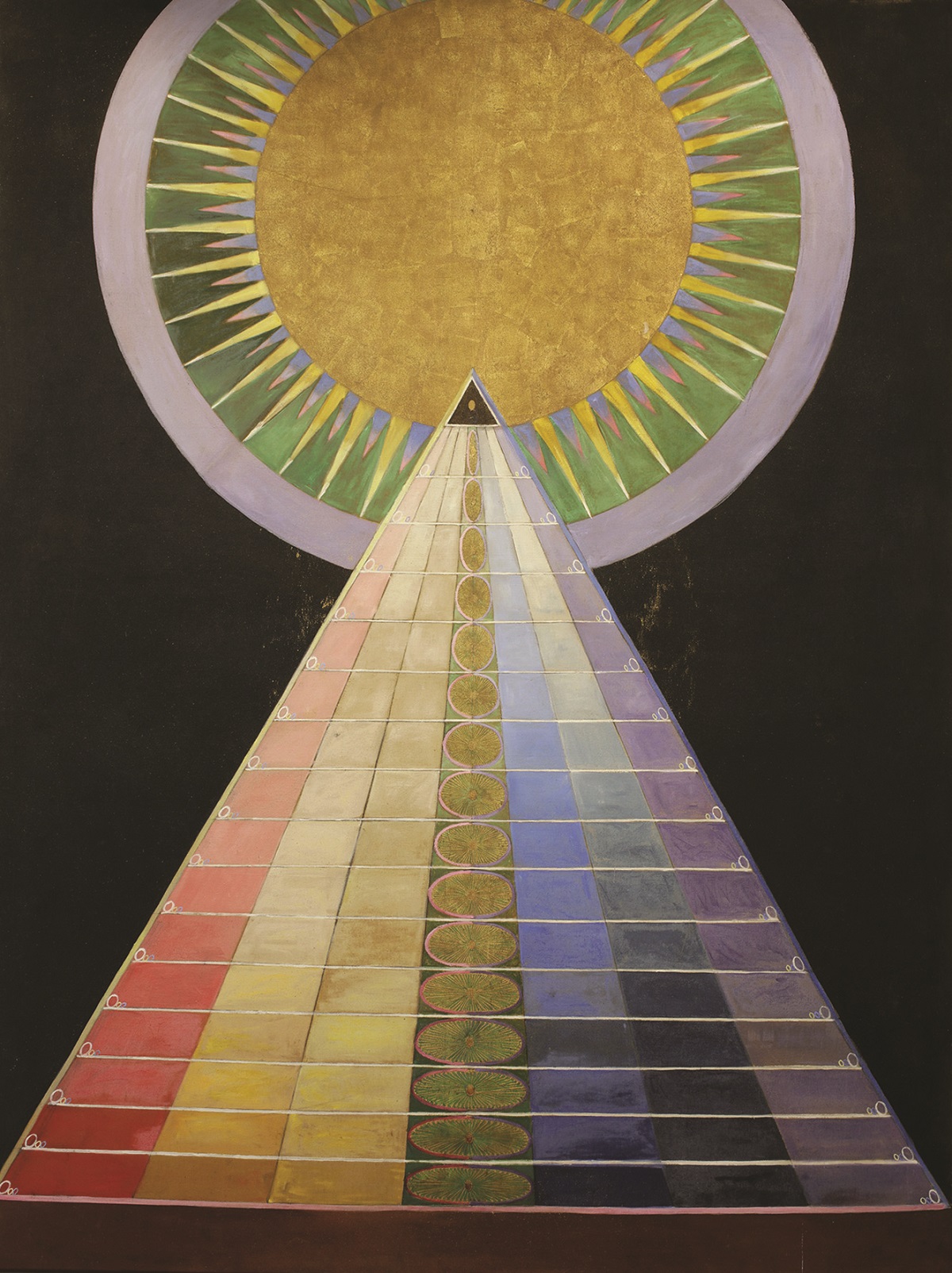 Until recently, art history has traditionally been written as the story of one heroic male artist after another. In 1985 in New York the Guerrilla Girls rephrased the classic question “Why haven’t there been more great women artists”, asking instead “Why haven’t more women been considered great?” Certainly, times are better for women artists, yet many biases still exist. For example, while women make up 51 per cent of visual artists practicing today, only 28 per cent of museum solo exhibitions in eight institutions have featured them from 2000 to 2014.*

Every art-lover knows Frida Kahlo and Tracey Emin, but what do you know about these important female artists?

Sweden’s Hilma af Klint burst onto the art scene with her current exhibition Painting the Unseen at London’s Serpentine Gallery (until May 15) – over 70 years after she died. Written out of art history at her own request – she stipulated in her will that her works should not be made public until at least 20 years after her death – af Klint (1862-1944) is now being touted as no less than the pioneer of abstract art. She left over a thousand paintings, many created years, if not decades, before the acknowledged pioneers of abstraction, such as Kandinsky, Mondrian and Malevich. Says Lizzie Carey- Thomas, Head of Programmes at Serpentine Galleries: “I think she was aware that people would think she was a madwoman if she were to have her works released publicly. She obviously realised that at some point the world would catch up with her and be ready for them. And she also understood her relationship to the world as a woman and the context in which she was living.”

The best documented female painter of the Dutch Golden Age, Rachel Ruysch (1664-1750) specialised in floral vanitas imagery, a popular genre of still life painting in which beautifully crafted objects symbolised man’s mortality and the transient nature of worldly possessions. Rachel practiced her drawing and painting skills on the flowers and insects collected by her father, an Amsterdam anatomy professor. Many of the specimens were preserved in an embalming fluid, giving them the qualities of ‘eternal life’. This inspired the artist’s life-long fascination with immortalising the fragile beauty of living objects. Apprenticed at the age of 15 to the Dutch artist Willem van Aelst, who himself specialised in still lifes with flowers or game, Ruysch quickly learned techniques to make her compositions appear spontaneous and three-dimensional. In 1693 she married a portrait painter and went on to have ten children, while still producing commissions for an international circle of patrons.

The first international celebrity woman artist, Elisabeth-Louise Vigée-Lebrun (1755-1842) was a child prodigy. In 1776, she was summoned to Versailles to paint a portrait of Queen Marie Antoinette. Praised for its freshness and charm, the work was so well received that Vigée-Lebrun became the Queen’s favorite, creating more than 20 portraits of her royal patron in a variety of poses and costumes. She also painted a number of self-portraits, many in the style of artists whose work she admired. Upon the outbreak of the French Revolution, she left France and spent most of her remaining life abroad, painting commissioned works in Rome, Naples, Vienna, Berlin, St. Petersburg, Moscow and London (where she painted Lord Byron, among others). Incredibly prolific, Vigée Le Brun left 900 pictures and three volumes of memoirs revealing her great intelligence and wit.

Rejecting training as a seamstress, Rosa Bonheur (1822-1899) was schooled as an artist in Bordeaux by her father, an art teacher and friend of the social theorist Henri de Saint-Simon, who advocated for the equality of women. He inspired Rosa’s liberal outlook and defiant personality, which eventually led to her adopting masculine dress and behaviour (as well as female companions). Working in the ‘animalière tradition’ – dramatic, highly realistic landscapes of narrative animal scenes – she began sketching in stockyards, livestock markets and slaughterhouses, gaining an intimate knowledge of animal anatomy. Bonheur exhibited regularly at the Paris Salon, and her work rapidly gained popularity in the United States and Britain, selling so well that she purchased a chateau near Fontainebleau, where she had a menagerie which included lions. A famous eccentric, she was particularly intrigued by the legends of the American West and befriended “Buffalo Bill” Cody when his Wild West show came to Paris. In a period when women’s art was considered inferior, Bonheur was a powerful example of the confident, bold “new woman”.

Shrewsbury-born Margaret Agnes Rope (1882-1953) was a stained glass artist in the Arts and Crafts movement. Her works are notable for their consummate skill, religious fervour and the individual personality reflected in the faces she portrayed. Following her Anglican father’s early death, Rope’s mother converted to Catholicism. (This meant raising her children in poverty, since her father’s will denied money to descendants ‘in religion’.) Rope attended Birmingham Municipal School of Art, winning a series of prizes and scholarships. Upon graduation, she became a successful independent glass artist, working on many major commissions, including seven windows in Shrewsbury Cathedral. In 1923, she became a Carmelite nun (giving up her smoking and motorbike-riding), but continued her work, sending glass by train to the Glass House in Fulham for cutting, firing and leading.

Pan Yulian (1895–1977) was the first woman in China to paint in the Western style. Born to a poor family in Jiangsu Province, she became the ward of her uncle, who sold her to a brothel. At 17, she attracted the attention of a wealthy customs official, who bought her as his second wife. Yulian entered the Shanghai Art School in 1920 and went on to Paris and Rome for further study. Because her modernist style and nude subjects caused controversy and criticism in 1930s China, she moved to Paris in 1937 and remained there for the next forty years, winning numerous prizes. She later taught at the École des Beaux Arts and served as the chair of the Chinese Art Association. After her death much of her work was collected by the National Art Museum in Beijing and her life has been portrayed in novels and film.

Although born in Pennsylvania, Mary Cassatt (1844-1926) lived most of her life in France. She studied privately with the painter and sculptor Jean-Leon Gerome (women were barred from attending the Ecole des Beaux- Arts ) and, befriending Edgar Degas, she became one of the most recognised members of the French Impressionists. Under Degas’ tutelage, she began to collect Japanese prints, their patterns and asymmetric designs greatly influencing her compositions. Renowned for her virtuosity with pastels and precise handling of subjects exploring women’s hidden lives, Cassatt’s images ushered in a new naturalism for the depiction of female society. Deciding early on that she would focus on her career and never marry, Cassatt became one of the best exhibitors of her generation. Sadly, a series of health problems in later life left her blind and unable to paint and, devastated by her inability to create art, she poured her energies into fighting for the women’s suffrage movement until her death.

Alma W. Thomas (1891-1978) was born in the US state of Georgia, where her home town prohibited blacks in public libraries. Desiring a better education for their daughters and concerned by the 1906 race riots in nearby Atlanta, Thomas’ parents moved the family to Washington, DC, where Thomas remained her whole life, witnessing world wars, the Great Depression, the Harlem Renaissance and the civil rights movement. She was the first African American woman to graduate from Howard University’s Art Department and earn a master’s degree from Columbia University. Only after retiring from teaching did she focus on her own works, some of the best loved of which were inspired by the launch of the first NASA rocket. In 1972 she became the first African-American woman to have a solo exhibition at the Whitney Museum of American Art. In 2009 two of her paintings were selected by First Lady Michelle Obama to be exhibited in the White House.

One of the most renowned artists to come of age in the aftermath of Abstract Expressionism, Eva Hesse (1936-1970) was born into a Jewish family in Hamburg and was sent to the Netherlands via the Kindertransport at age two before being reunited with her family and emigrating to New York in 1939. Originally pursuing a career in commercial textile design, her practice as an expressionist painter led her to experiment with industrial materials such as rope, wire and fibre glass. Embracing the spirit of Minimalism, her works suggested a wide range of organic associations, psychological moods and female sexual imagery. Eventually, she was credited with inventing a new form of free-standing sculpture. Sadly, Hesse’s life was plagued by physical and emotional hardship, including family illness and depression. She died of a brain tumour at 34.

A Cuban performance artist best known for her “earth-body” works, Ana Mendieta (1948-1985) arrived in the United States in 1961 as a refugee from Fidel Castro’s revolution. She spent her first weeks in refugee camps amid miserable conditions before moving to a series of institutions and foster homes. Generally autobiographical, Mendieta’s works focuses on themes of feminism, violence, death and displacement via nature’s four elements. Her finest works establish a dialogue between landscape and the female body, often using her own silhouette in mud, sand and grass. Tragically, the sensational circumstances of Mendieta’s death have overshadowed her artistic legacy. She died in 1985 after falling 33 stories from her Greenwich Village flat after a violent argument with her husband, the volatile minimalist sculptor Carl Andre. Andre was later tried and acquitted of her murder, causing an uproar in the feminist community.