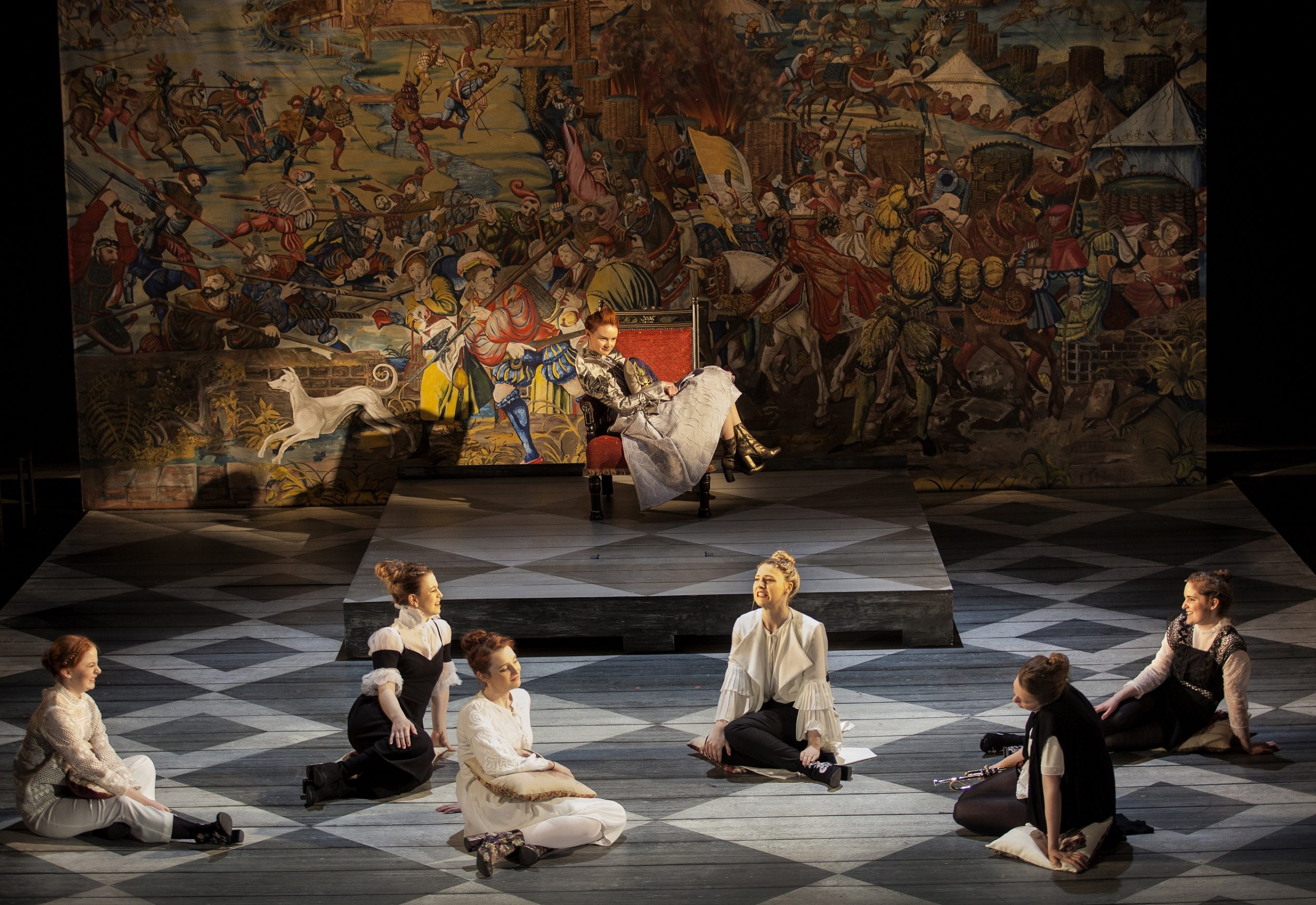 Scenic artists are masters of a bewildering range of skills, from faux finishes, ageing, texturing and poly sculpting to trompe l’oeil, marbling, ragging and wood graining. Yet while their work is a crucial part of a stage, film or TV production, they are for the most part unsung heroes, happy for their work to remain literally in the background. Artmag spoke to some leading scenic artists about a role in the creative industries that not many people know about.

She describes the hierarchy a scenic artist works under: “The director, designer and lighting designer are the Holy Trinity. You’re there to support that. Sometimes they don’t quite know what they’re after, so that can be a wee challenge. At the other end are the ones who know exactly what they’re after, and it’s not something that we’re able to achieve within the budget. So we have to come up with ways of getting more bang for the buck. It’s about managing expectations and making people happy. That’s the hard bit – getting to the point of knowing what you’re doing. The actual painting work itself is a joy.”

In describing the end result of her work, she repeats the credo of a former colleague: ‘Nice from afar, but far from nice’. She expains: “That’s all you need onstage a lot of the time. It’s in the background. Our job is helping to create a picture and helping the audience believe what the actors are doing. If people are sitting looking at the set, we’re in big trouble. It’s there to support the drama. I’m here to provide a service for somebody else.”

She concludes: “Every show is great fun. Most of the time, you’re going, ‘I’m getting paid to do this. Brilliant!’”

One of Britain’s busiest freelance scenic artists, Alison Irwin has racked up a lengthy list of credits such as Outlander, the recent Edinburgh Fringe show ‘Meet Me At Dawn’, Edinburgh’s Traverse Theatre production of ‘Grain in the Blood’, the Olivier award-winning ‘Five Guys Named Moe’ and the BBC TV children’s drama Teacup Travels. 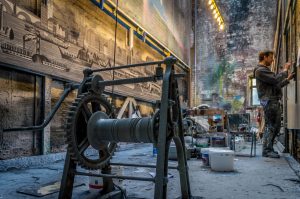 She outlines one of the challenges facing traditional scenic artists: technology. “Painting cloth for the theatre is a lovely thing to do,” she says, “but they are few and far between now, because it’s a very expensive thing to do. A lot of companies get stuff printed now. You still get the occasional cloth, but it’s a big investment for a theatre company in terms of the cost of the cloth and the materials and the time it takes, and you need a big space to do it in.”

“Prints don’t light as well, because you’re not using high-pigmented paints designed to be used on theatre sets and react with the lighting. For example, with the Rosco* paints we use, a lighting designer will know how his gels (filters) affect the colours of the paint when it’s lit. You have to consider that when you’re painting. Not what it looks like in the workshop, but what it’s going to look like onstage.” *brand name

Scenic artists need to know their materials, which are vast and often quite unusual, from industrial coating to make thin layers of texture to resin powder to create a stone effect when painted on to various glazes. They also need a range of tools, such as trowels, rollers and spray-guns, not to  mention a Personal Protection Equipment (or PPE) kit, including gloves, masks, goggles and steel-capped shoes.

Says Alison: “I’m like a tradesman. I have a bank of knowledge of what a material will do, so I will know what I need for a particular job. It’s a bit of an alchemy. There’s a lot of mark-making to bring life to something.”

Kelvin Guy has worked for over 30 years at Scottish Opera, where he is Head Scenic Artist primarily responsible for painting the large cloth backdrops for countless productions. His work is renowned throughout the theatre art world and this year he received the Technical Award at the Sunday Herald Culture Awards.

For their production of ‘Don Pasquale’ set and costumer designer André Barbe and stage director Renaud Doucet were in doubt about the main attraction of working for Scottish Opera. André explains: “We realised that they had many strengths, but the biggest strength was the scenic painting. So when we did this production, we said, ‘Oh, we need to use the talent of Kelvin, because he’s so wonderful.’ It’s a pleasure to go into Kelvin’s workshop, see him stretch those huge canvases and put on classical music and immerse himself in this atmosphere. I just want to spend my days looking at it.”

When working on ‘Don Pasquale’ Kelvin explained the process of creating the 10 metre high by 15 metre backdrop: “With this particular cloth we’ve had to draw it out so that we can separate areas that need to be dyed or painted. In this case, because there’s a perspective involved, we have to be fairly precise in our initial drawing and to re-establish that between the layers of paint, which is quite a laborious thing. It means inking in, painting over, inking in. There’s a repetitive process to it, but it slowly inches its way along. When we finish it, it will be hung in the theatre. Any notes that need to be done, like strengthening dyes or shading down areas for lighting purposes, will be done then.”

The Citizens Theatre in Glasgow has the oldest paint frame in Scotland. Basically a long, thin room measuring ten metres by six, the Victorian construction is fitted with winches which enable scenic artist Neil Haynes to move the canvas wherever he wants to paint it. Neil says: “It’s a beautiful, adaptable space and a painter’s dream. I’m very honoured to be working on it. It’s a pleasure to be working on such large canvases.”

A scenic artist artist for 20 years, including thirteen at the Citizens, Neil is shy about calling himself an artist: “An artist is someone who comes up with an original idea, whereas a scenic artist’s job is to interpret someone else’s idea for the stage and make it real. It’s absolutely fine being in the background. It’s not necessarily about getting any recognition for it. It’s not a piece of fine art on the wall. I think the general public will go to a show and not think about the work that’s gone into the set and just accept it as being a piece of theatre.”

Neil downplays the threat of technology to his job: “When a printed stage cloth is onstage, it’s not got any artistic input to it. You can always tell under stage lighting that it’s just a printed cloth. There’s no life to it. Whereas a painted cloth has the painter’s hand, brushstroke, your particular technique of doing it. It’s very personal. You couldn’t ever replace scenic art in the theatre.”