Rotterdam is not a typical Dutch city. Emerging from its bombed out WWII ruins – reconstruction began just two weeks after the war ended, the ‘fire boundary’ still marked today by small lights in the pavement in the shape of red flames – rather than rebuilding in the image of its past, the city made a clean break with it and opted for modern architecture, with light, air and space the watchwords. Today’s Rotterdam is a buzzing, energetic metropolis, its innovative, forward-looking spirit captured in the motto: ‘Make it happen’.

Every February sees the city burst into a celebration of culture during Art Rotterdam Week, when event organisers, galleries, pop-up shops, open studios and other venues coordinate their dates to showcase local and international art and design.

Central to the week is the Art Rotterdam Fair, held in the cavernous halls of the magnificent, UNESCO-listed Van Nelle Fabriek, a former tea, coffee and tobacco factory. Opened in 1931, the gleaming white building is a prime example of the International Style. Celebrating its 20th year in 2019, the fair is divided into several sections featuring, for example, international galleries showing the most recent developments, young galleries, solo presentations and emerging artists, video art and non-profit spaces and artist initiatives.

Another key component of Art Rotterdam Week is Object, a platform for designers working in different disciplines and with various materials to show their latest limited editions and one-offs. Object is held in the HAKA building, another former industrial building from the 1930s which is now a base for alternative energy companies.

Turning repurposed shipping containers into temporary galleries, Rotterdam Photo features a wide range of independent photographers whose work is selected from an open call on a different theme each year. In 2019 it’s City Limits. Inspired by the heritage of Rotterdam as a port city, the festival also uses public spaces to bring photography out of the ‘white cube’.

A great place to start an art tour of Rotterdam is in the ‘Museumkwartier’ and in the arty Witte de With Street leading off it.

Rotterdam’s premier art museum is Museum Boijmans Van Beuningen, rather clumsily named after the combined collection of a lawyer and an industrialist which forms the core of the museum’s works. The permanent collection, with one of the world’s largest Surrealist collections at its heart, is shown in displays which juxtapose old masters and modern works. Together they tell the history of art from the Middle Ages to the present.

Centrepiece works include Pieter Bruegel the Elder’s ‘The Tower of Babel’, Salvador Dali’s ‘The Face of War’, Rene Magritte’s ‘On the Threshold of Liberty’ and Richard Serra’s 13-metre ’Waxing Arcs’. Other featured artists include van Eyck, Bosch, Mondrian, Rembrandt, Rubens, Dürer, Monet, Degas, Picasso, van Gogh, De Kooning and many more. There is also an excellent selection of British and American pop art (Hockney, Warhol, Oldenburg) and decorative arts such as medieval ceramics, Renaissance glass and contemporary Dutch design. The permanent collection is supplemented by around 25 temporary exhibitions a year.

Currently under construction next door (and looking like it has just landed from above) is the Depot Boijmans Van Beuningen, the first of its kind in the world. Like a massive, reflective bowl amplifying the surrounding greenery of Museum Park, the revolutionary storage facility will enable visitors to view in huge glass display cases the 95 per cent or so of the museum’s 145,000 artworks that, like most large museums, the museum itself lacks the space to display. (The bulk of the collection is currently stored in eight buildings throughout Holland.)

In the case of BvB, these include tubular steel chairs by Gerrit Rietveld and Marcel Breuer, paintings by Karel Appel and a variety of works by the likes of Dutch photographers Rineke Dijkstra and Anton Corbijn, the South African painter Marlese Dumas and the Rotterdam-based collective Atelier van Lieshout.

Due for completion in late 2019, the Depot has been designed by Rotterdam architects MVRDV, who were also responsible for the Markthal. The building will include five separate climate-controlled spaces depending on the optimum conditions for storing different works. A roof garden and cafe will offer sweeping views of the city.

On the other side of Museum Park, the Kunsthal Rotterdam (‘Kunst’ is Dutch for art) has no permanent collection of its own, and instead organises around 25 exhibitions a year, several running simultaneously, aimed at different audiences and presenting culture in the broadest sense of the word. The surrounding sculpture garden includes giant rabbits, towering crows and a pair of buttocks on legs. Don’t forget to look up to see Antony Gormley’s rooftop figure ‘Another Time II’ (2006).

Lined with galleries, interesting gift shops and arty cafes, the nearby Witte de Withstraat (named after a 17th century naval officer), is the city’s ‘axis of art’.

The Witte de With Centre for Contemporary Art encourages experimental work by international artists and curators. There is a strong emphasis on collaboration and many now renowned contemporary artists received early exposure there. Presentations vary from solo exhibitions and thematic group exhibitions to year-long projects. 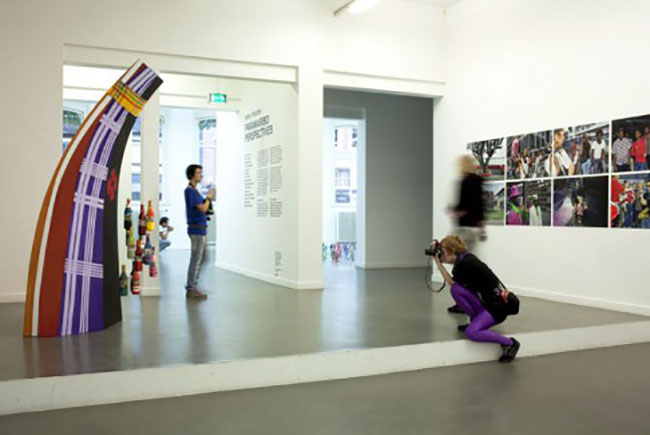 Every Friday night Witte de Withstraat is thronged with people during ‘Kunstavond’ (Art Evening), when admission to galleries is free. Guided tours are available.

Photography fans can head over the Erasmus Bridge to the Nederlands Fotomuseum (National Museum of Photography), which holds the national collection of over five million images. The museum exhibits photography in all its facets, from documentary and experimental to the historical and present day. Special exhibitions feature major names in the world of photography.

Highlights include: Pablo Picasso and Carl Nesjar’s cubist ‘Sylvette’ (1970) outside the Museum Boijmans Van Beuningen, based on a drawing by Picasso and made of filled concrete with black pebbles, with Nesjar using a sand-blaster to ‘draw’ the girl; David Bade’s colourful melange of detritus (and Rotterdam’s unofficial Statue of Liberty) ‘Anita’ (2001); Atelier van Lieshout’s ‘Cascade’ (2009), a tower of oil barrels with human figures covered in the black stuff; and Paul McCarthy’s giant, bronze ‘Santa Claus’ (2001) holding an enormous sex toy.

Along the Westersingel (West Canal) you’ll find among others: Joel Shapiro’s ‘Untitled’ (1999), a construction of five blocks resembling a human figure in different poses when viewed from different angles; Auguste Rodin’s unfinished bronze ‘L’home qui marche’ (1905); Giuseppe Penone’s ‘Elevazione’ (2001), a bronze tree which seems to grow out of five surrounding live trees; and Fritz Wotruba’s ‘Reclining Figure’ (1969), hewn from stone, as he saw it the only true material for a sculptor.

In 2018 the Merwehaven district of Rotterdam hosted Pow! Wow!, the world’s premier street art festival. The resulting artworks can still be seen adorning buildings and walls throughout what is now the Rotterdam Makers District, or M4H, home to designers and artists such as Daan Roosegaarde, Richard Hutten and Joep van Lieshout.

In the streets around their gallery in the lively Oude Noorden (Old North) district, the Sober Collective has invited some of the world’s leading street artists to leave their mark in a project called Sober Walls.

You can book a guided tour of Rotterdam street art with the Rewriters or download their app and walk the route yourself.

Having moved away from its pre-WWII ‘Dutch charm’, still untouched in places like Amsterdam and Utrecht, Rotterdam’s commitment to ground-breaking architecture has resulted in a cityscape unlike few others in Europe.

Visitors arriving at Central Station wonder at its angular roof stabbing the sky like a huge, white arrow pointing to the city centre.

The city’s most definitive architectural icon, the 800-metre long Erasmus Bridge (named after the Rotterdam-born Renaissance scholar), looms over the harbour like a giant stringed instrument.

One of the newest buildings with the “Wow!” factor is the Markthal, a giant, hangar-like structure with a 40-metre high arch covered in the world’s biggest artwork. Made of 4,000 shiny tiles (printed with the help of Pixar Studios), Arno Coonen’s mega-mural ‘Horn of Plenty’ is the size of two football fields and depicts some of the products for sale beneath it, such as giant fish, fruits and vegetables. Soaring above the shoppers below like a modern Sistine Chapel, it was intended by the artist as “a worship of nature, an ode to the universe” designed to induce a “child-like sense of wonder”. With 228 apartments seemingly hanging over the marker floor, it is the first retail/accommodation combo of its kind in the world.

A short walk from the Markthal are the Cube Houses, a cluster of 38 canary yellow apartments seemingly piled higgledy-piggledy on top of one another. People really do live in these things, and one of them is open for the public to see why its residents do not tumble to the ground. The houses are each supposed to resemble a tree and, grouped together, a forest – hence their nickname, the ‘Blaakse Bos’ (Blaak Forest), named after the nearby Blaak train station. One of the cubes is available for B&B stays.

Commissioned as a family home by the tobacco importer Albertus Sonneveld and completed in 1933, the Sonneveld House is one of the best preserved houses in the ‘Nieuwe Bouwen’ (New Building) style, the Dutch functionalism movement of which light, air and space were the principles. Designed by the architecture firm of Brinkman and Van der Vlugt (Sonneveld knew them as the designers of the Van Nelle Factory (see Art Rotterdam), where he worked) the house was an ultra-modern residence for its time, with smooth transitions from room to room, almost every one of which opens onto a balcony, terrace or the garden. Inspired by his business trips to America, Sonneveld installed all the latest ‘mod cons’, including an electric goods lift to convey supplies from the service entrance to the kitchen, a heated towel rack in the bathroom and a ten-jet massage shower. Much of the furniture and accessories were supplied by the Rotterdam designer W.H. Gispen, known for his use of tubular steel, while artist Bart van der Leck’s choice of bold colours completed the ‘Gesamtkunstwerk’ (total work of art).

Nearby the Chabot Museum(1938) is another beautiful villa in the Nieuwe Bouwen style and which today it is used as a gallery dedicated to paintings and sculptures by the Dutch expressionist Henk Chabot (1894-1949) and to works by his contemporaries and present day kindred spirits.