After re-opening 11th December, Glasgow’s The Tramway will continue to host the first exhibition in the UK by Sri Lankan-born artist Rajni Perera. Now living and working in Toronto, Canada, Perera graduated in 2011 from OCAD University, Toronto, where she studied drawing and painting.

There are seventeen works on show here, in several media: paintings, modelled heads with headdresses, textile work and jewellery, face masks and one full-length costumed figure carrying an illuminated lantern.

The exhibition begins with Bust 2 Traveller 8 which is a modelled head with cream ruffled gown and headdress. This piece presents its hooded back view to the visitor on entering. On moving round to the front the viewer is surprised by the vivid primary colour red of the figure’s face. The costume elements are beautifully made and the head is presented like a fashion show exhibit or anthropological museum artefact. The long pearl-like earrings have woven lace embellishments attached.

Traveller 8 has six eyes, three on each side of the face. Two of the three eyes are what one might describe as ‘conjoined’. The ears and lower lip are also altered in form, it is a modified human face. Most of the figures portrayed have similarly altered features.

The larger than life-size presence of the figure Commemoration/Ancestor is immediately evident upon entering the gallery space. He is a towering blue figure carrying an illuminated lantern. Several elements, including his headgear and lantern, look as if they are fashioned from pieces of rattan furniture. He looks like a desert nomad and is clothed and equipped to cope with adversity. Here is an imagined world, or worlds, portrayed by the artist – the viewer is invited to create a story for these characters.

Bust 1 Traveller 7 is a vivid blue head which has a long head dress and robes made of coloured plastic bubble wrap, capped by long fur edging. This head also has the ‘conjoined’ double eyes on each side of the face. Again one is reminded of a museum exhibit.

Along the walls, paintings of the ‘Travellers’ are composed like traditional portraits, depicting costumed figures, some with faces visible, others completely masked or veiled.

The portraits have beautifully vivid colours, the clothing is highly decorated with botanical and geometric patterns and painted in intricate detail. The clothing style and decoration resembles what might be seen in the figures in Indian miniaturist paintings, with glimpses of psychedelia and science fiction characters, reinterpreted by the artist.

There are two ‘Ancestor’ portraits which contrast with the ‘Travellers’. The Ancestors are set against a sunny yellow background perhaps conveying a hot desert-like climate. The Ancestors are not masked, while the Travellers appear to need the protection of masks and veils in the changed environments of an imagined future. 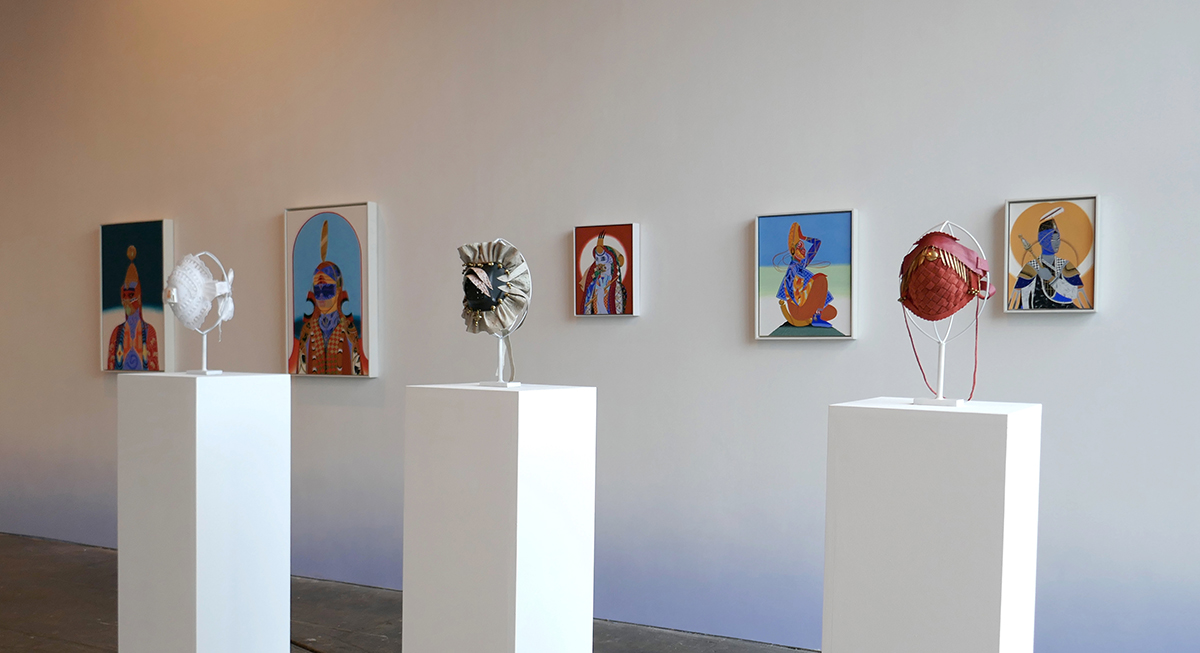 There are also three individual face masks on plinths, each displaying a high level of craftsmanship and some alternative use of materials. A white lace mask has a ‘3M’ ventilator unit built in – the mask was made in 2019 but has real global significance in 2020. The lacework appears to reference traditional Sri Lankan Beeralu work. In contrast, Mask 2 incorporates a Motocross elbow pad and Mask 3 is skilfully basket-woven red suede with brass adornments.

Ring For Truth on another plinth is a wearable finger ring/sculpture/weapon in polished brass, striking in its extreme length, sharpness and precise manufacture.

In Banner 2 there is a figure that at first glance looks like some form of hybrid animal rather than a human form, until you realise there are in fact multi-fingered hands and fully bent arms and legs and a torso. The character of this piece is stylistically somewhat different from the other painted works.

The 3D artefacts are beautifully crafted and Perera’s draughtsmanship and painting are beautifully carried out. There is also a sound installation playing ‘sounds of nature from a mutated future’, as described by Perera.

The exhibition is preceded by a display board with the artist’s narrative for the characters and environments she has created. The works in themselves are striking and will undoubtedly stir the individual imaginations of viewers, it adds further interest to consider Perera’s described influences and vision for this fine collection of works.

Admission is free, open Tuesday to Saturday, by advance booking online only. Your visit may be time-restricted. Social-distancing measures are in place.

Please note that Tramway will be temporarily closed after Friday 20th November in line with The Scottish Government’s Level 4 Covid-19 restrictions, until at least Friday 11th December.