The first exhibition in Scotland by the artist Mohammad Barrangi delivers on the promise brought forward by its title – Anything is Possible – by guiding the viewer in a world of magic and fabled characters. Including just eleven pieces by Barrangi, the sharp curation of these artworks manages to create a highly engaging space capable of demonstrating the artist’s impressive versatility. The variety of media and techniques included in a limited number of artworks creates an immersive experience as visitors will find themselves constantly discovering new and exciting details and conceptual layers hidden within Barrangi’s art.

The most prominent influences that consistently emerge in Barrangi’s work are linked to his Iranian origins, spanning calligraphy, Persian miniature painting tradition and Iranian mythological stories. The artist in fact states that he hopes that through his art he will be able to transport the audience to Iran. Barrangi achieves this by using hand-made traditional calligraphy pens to create his intricate ink drawings which are then transferred onto a background of Iranian wood stain washer over the paper. The final results evoke ancient manuscripts both in colour and in texture.

Barrangi also references Persian miniature paintings in artworks such as Play in Edinburgh City Square (2022) where he reproduces the ancient tradition of Persianate albums where a central illustrated folio is pasted on richly decorated and patterned margins. Traditionally these margins can include additional illustrations as it happens in Barrangi’s artwork. The artist also includes in his work Iranian iconography such as elephants – symbols of royalty – or felines that populate Iranian mythological stories.

Barrangi, however, adds his personal twist to Persianate and Iranian traditions most notably by enlarging his design challenging the traditional scale of miniature paintings. The exhibition includes colossal, large-scale pieces- that occupy entire walls- and blow-ups of drawing propped onto a wooden background like Cavalier and Waiting for You (2022). These artworks contain characters that could likely populate a fairy-tale. In an interview with Barrangi, he confirmed that the resemblance I noticed with theatre props and the sculptural pieces was legitimate as the artworks are inspired by the setting of an opera house.

Another way Barrangi modifies Persianate iconography is through the creation of hybrid creatures with human heads and animal bodies. All these characters are important women for the artists, either with a personal connection to him – like his mother and his girlfriend – or famous characters such as Frida Kahlo. Barrangi explained that he chooses to include only their visage in his artworks- combined with an animal body or simply floating- to express through these faces the multiple masks everyone wears in different social interactions, reflecting on social constructs as well as identity.

The theme of cultural identity is another topic that emerges in his work tainting the pure Persianate iconography with Barrangi’s experience of arriving in the UK with refugee status. One of the most important motifs connected to this topic is another anthropomorphic subject: a human-headed bird that continuously re-appears across his work. This subject is a projection of Barrangi’s fantasy as he noted ‘I imagine myself as a bird flying over the borders regardless of country or nationality.’ Through the human-headed bird flying, he underscores and advocates the importance of cross-cultural understanding.

This theme is also inspired by the poem The Conference of the Birds by Sufi poet Attar of Nishapur (1777). One of Barrangi’s seminal influences, this poem – through the description of metaphorical coming-together of all of the world’s birds – teaches the fundamental principles of Sufism. These tropes express strongly positive messages about the possibility to overcome border divisions and cultural differences. However, I wonder whether there isn’t an underlying message in Barrangi’s works about the way that – besides his best attempts – the communication and translation of his experiences and identity remain an imperfect exchange where parts of his message are inevitably lost in translation. I gathered this feeling by observing Barrangi’s peculiar choice to include Persianate calligraphy in some of the paintings, such as My Hands (2021), but to make it illegible through the artistic treatment of the surfaces, leaving a sense of ambiguity to the narrative contained within.

Barrangi also includes in his artworks reference to his own disability in his left hand. He made me notice that most of his hybrid women are represented with only one arm – a detail that originally escaped my attention as I had assumed it depended on Barrangi’s preference to represent most of them in profile, following Persianate artistic tradition. In his work, he explores the theme of disability with irony and wit: pointing out at his work My Hands (2022) he joked about it saying that he painted hands to make up for his left one.

I strongly recommend this exhibition that will transport you to a world of fantasy where anything is truly possible. Visitors will be able to find a complex exhibition capable of offering them an escape from daily routine into the artist’s incredible world filled with magical creatures and joyful funny subjects. While at the same time the audience will have the incredible opportunity to encounter and learn more about Iranian artistic tradition exploring complex narratives about cultural and personal identity.

With grateful thanks from Artmag to Sofia Cotrona for this review and images (photo’s by Alan Dimmick and Neil Hanna where stated). 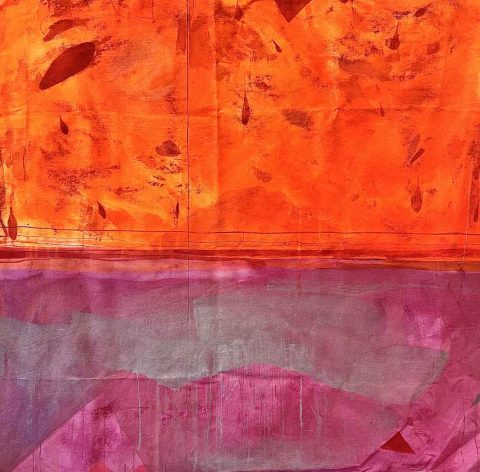