Mary Mary is delighted to present Gerda Scheepers’ fourth solo exhibition at the gallery. Drawing on various bodies of work spanning the last fifteen years, starting with her early furniture sculptures from 2004, this exhibition of new work brings together both wall and floor based pieces. Painting is an important reference point throughout the exhibition, though the formal elements of such are shifted and abstracted, with sculptural tools and working methods replacing that of brushes and paint.

Through Scheepers’ methodised application of her materials; painting with pieces of fabric, a pair of scissors and familiar forms, she has created a pathway back to painting through sculptural means. A pair of colourful wall works that resemble soft, unlikely shelves are simultaneously abstract paintings. Similarly ambiguous, another work acts like either a window blind that rolled in a possible pictorial message, or a painting that quit and became a roller blind. In the ‘Pillow Riley’ series (art historical references in the works are both explicit aswell as being ”just part of the furniture”) the typical piping edge used to accentuate edges in upholstery finds itself posing as a frame to a canvas before drifting and hanging off the edge; a disobedient border.

Scheepers work has much of its focus in formal approaches to medium and relations to sculpture and painting. The works are hybrids; at once pictorial surface, object and ultimately performative. Gestures are hinted at by a material physicality, as well as a strong nod to the figurative and bodily forms, the works acting as performer, stage and set.

Her use of figuration, though always pared down and minimal is even more reduced here. Still present, the references have become more abstracted, conveying themselves more through association and common familiarity. The predominant materials are predyed cottons or fabrics associated with casual wear, with forms partly resulting from re-issued studio leftovers or an arm rest separated from its couch-body. They make for a form and colour palette that is deliberately part choice and part a result of availability, allowing for compositional possibilities that mimick a partially unchosen shared environment, similar to that of a neighbourhood or a family.

These are keen references to the theme of the individual in relation to both private and public domains, which runs throughout Scheepers’ practice. The shadow of the body, references to clothing, furniture, domesticity and architecture lead us to depictions of the tone and atmosphere of the everyday and it’s politics, through Scheepers’ lens.

Image: Gerda Scheepers, Shelve for the past, 2019, Fabric 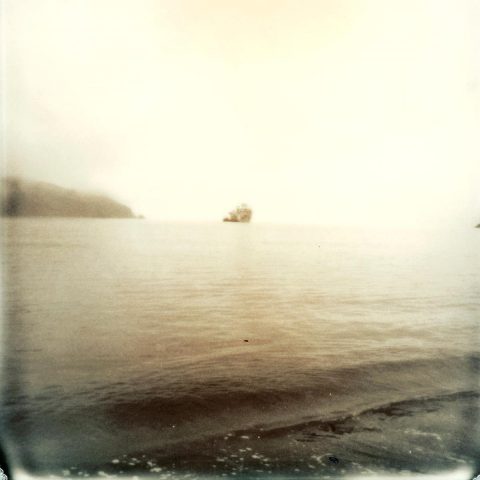