The Mediterranean as a recurring theme, focal point, or even functioning as a muse to many artists is apparently not simply a geographic location, but also a concept containing the eternal and universal multiplicity of various worlds.  It is a union of binary forces: the novel and the ancient, as well as the energetic and the tranquil. Madrid, as the perceived cultural center of Spain, is home to a foundation which provides its public with the opportunity to cultivate international culture, by taking a different and challenging approach to art as one of the highest forms of expression.

MAPFRE is hosting an impressive exhibition, whose scope encompasses an immense section of time, intertwining styles and outlooks of some of the greatest artists that ever lived, presenting them with ease and class in a contained, yet grand setting. Although the exhibition presented a great number of immaculate artists, I will hereby focus on only a few of them for the sake of clarity and detail.

The exhibition opens with Spain, with a common theme of the harmonious unity between the natural and human world. The commencement of modernity is germinating in the victory of colors and softness of light lines. Ignacio Pinazo’s spontaneous application of the paint speaks of impulsive, yet controlled technique and an immense impression with light and the way the sun drips down the Valencian coastline, depicting the vastness of the sea and the ongoing vibrant life on the coast. Joaquin Sorolla’s work in this display is preoccupied with depicting the picturesque activities of the rising bourgeoisie. The intense and saturated colors speak of the Mediterranean’s innocent divinity, its golden age. The Catalan painter Hermen (also- Hermenegildo) Anglada Camarasa was a prolific artist, using phosphorous in his submarine pieces, but perhaps his most striking work in the exhibition was ‘Storm on the Beach’, whereby the deep purples and raw pink seem to spill uncontrollably over the sky and the depth of the warm green sea and inspissate in dream-like shapes.

The exhibition continues with Italy, where the Mediterranean is viewed as a sight of historical temporal convergence and a spring for endless inspiration. The imposing past of Europe seems to come to life in the displayed works of art. The Berlin-born Massimo Campigli’s work pays a tasteful homage to Italy’s ancient past (reminiscent of the frescos in Pompei) in the organic style and symbolic depiction of the surrounding world.

Continuing on with France, the region of Provence was first revealed by literary artists like George Sand and Guy de Maupassant. The tradition of the Mediterranean inevitably evokes the sense of classic visual beauty, serene disposition, and a structured (perhaps even scientific) and magnificent approach to creation, which are all traits applicable to the pointillist Paul Signac. On the other hand, Cezanne’s work is particularly not only reflective but also self-reflexive. There is a sense of eternal stillness, a prescient wisdom in ‘La Montagne Sainte-Victoire’, where the viewer is faced with a wave of feeling, which one can interpret in a spectrum ranging from the biblical to the scenic. 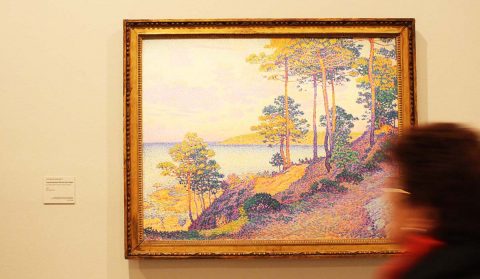 Henri Matisse transcends a mystical intimacy in his work, which although influenced by his time and fellow artists, remains timeless and oddly romantic. The presence of the female form is undeniably concealed in the subtle light on the landscape, remaining an intimate objection.

Picasso is perhaps as controversial a painter, as he is rumored to have been a lover and a friend. Needless to say, the female figure has a very different association and role in Picasso’s work as opposed to that of Matisse, but it is nevertheless intriguing and pleasantly intense to observe. The displayed ‘The Bay of Cannes’, however, shows a different side of the artist’s work. The house build in La Belle Epoch style provided a lavish source of isolation for Picasso right after Francois left him. The work is balanced and multi-layered, just as the artist’s perception or the surrounding world must have been. An interesting reoccurring motif in Picasso’s work is the pigeon (‘The pigeons’, 1957), which he drew as a boy and is said to have later equated with the perfect vision of the female presence. 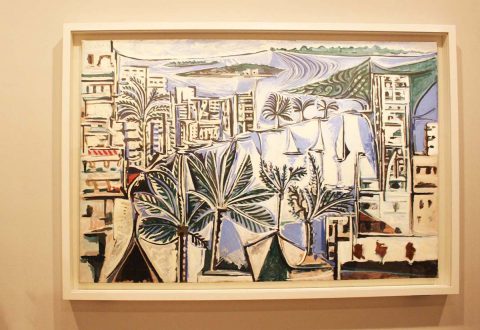 The message of a united European culture and space for collaboration and mutual amelioration is obviously more than relevant in the turbulent current state of the geopolitical continent of Europe. The exhibition is part of the international project Picasso-Mediterranean, involving over seventy international institutions. A few of the foundation’s collaborators for this exhibition are Musee d’Orsay, Musee national Picasso-Paris, the Centre Georges Pompidou, and many others. The democratic spirit seems to surface through the displayed works, but not in a political sense, but a spiritual one, exploring the depth of humane behavior and the possibility of the soul’s existence. Rediscovering the Mediterranean gives the viewers a breath of life, and cultivates a taste for the refined and for the elevated, as every exceptional work of art always manages to.