Eating Myself: A Woman Stews over Food, Family, and South America

Note this review and production contain description of eating disorders.

Productions are often defined by their lighting, staging, and sound, but smell remains an under-utilised sensation. Not so in Eating Myself. The aroma of fried bacon and boiling potatoes floats over the audience, as Pepa Duarte prepares a family recipe, a special South American soup, sharing stories of her relationship with food. It’s no gimmick. Cooking on stage creates a communal experience, transporting the audience from Peckham to Pepa’s upbringing in Peru. Many of her personal stories resound with the audience. ‘Am I fat?’, a constant refrain of her life, is overwhelmed by their adamant ‘No!’

Alone on stage, we see Pepa’s obsession with calorie counting. A spotlight exposes her scrawling her meal-plan-spreadsheet across the stage. Salt provides free flavour, garlic cloves cost 20 calories. Hunger is the enemy – the body stores fat in starvation mode – so gaps are stuffed with lettuce leaves. Pepa’s self-restraint survives her migration from Lima to London – an ‘English Disneyland’ of her once-adored craft beer – because a pint costs the same number of calories as a loaf of bread.

Her dialogue reveals the impossible contradictions of her diet. How can anyone be thin and Peruvian, when breakfast constitutes triple carbohydrates of potatoes, coated and deep-fried, dished up on rice? Why does food need flavour when the purpose of eating is to lose weight? The trade-offs between the social, cultural, and nutritional values – and costs – of food become impossible to navigate. Never physically full nor emotionally satisfied, the only certainty is Pepa’s own self-deprivation. The production is peppered with her poignant perspectives. ‘Even if I change the way I look, I can’t change the way I look at how I look.’ 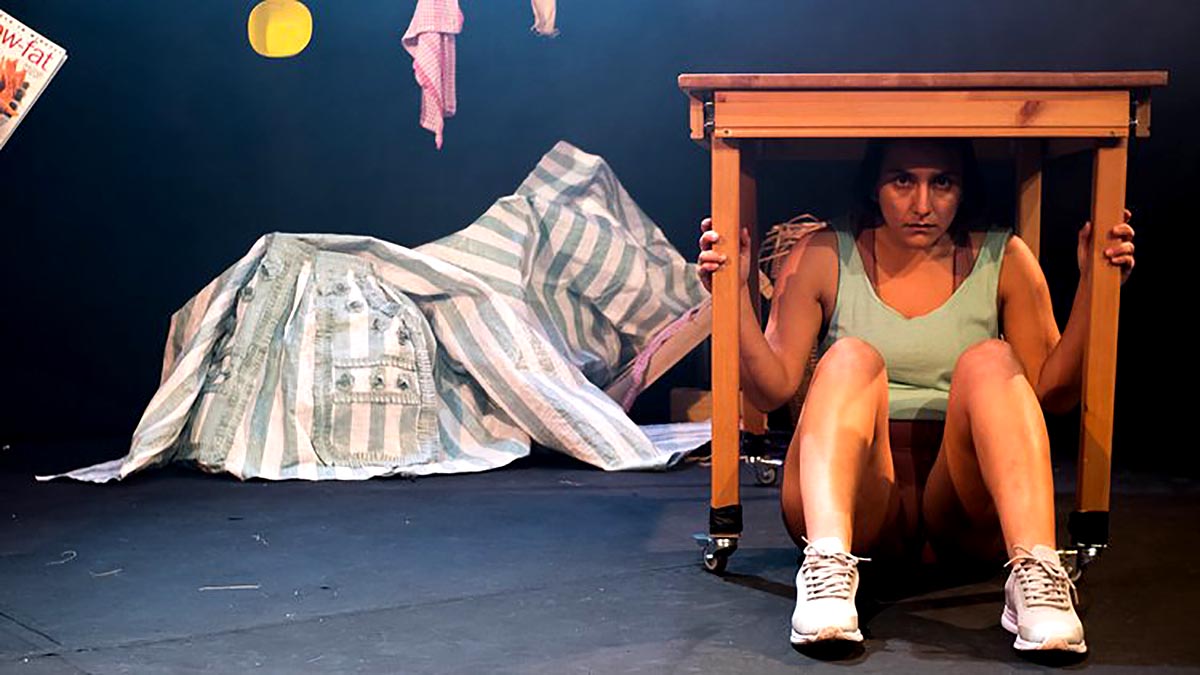 This could easily be another harrowing story of disordered eating, if not for Pepa’s own honesty and warmth. Her natural humour carries the production from her mother’s scepticism of stock cubes – ‘Of course it will give it flavour, but it will also give us all cancer’ – to her Skinny Bitch Award ceremony, clad in a sash of Union Jack-ed bread packets.

Eating Myself enjoys all the concision of a fringe production. Michael Harpur’s excellent lighting carries Pepa between characters and locations, whilst Laura Arroyo and Carolina Rieckhof’s set and costume dispenses of purposeless props. Pepa expertly manipulates dishcloths into young daughters and colanders into baby bumps. The microwave, a Peruvian Mother’s Day gift, represents the claustrophobic, even haunting, space of a kitchen for young women.

Refreshingly, Eating Myself focuses more upon the psychology and weight of Pepa’s personal expectations, rather than male, patriarchal, and social beauty standards. Women – including her mother and her grandmother – are at the core of her stories, and cuisine offers her a vital connection to them. There’s a sad irony implicit throughout in that Pepa knows the calorie content of every meal and its component ingredients to the decimal point, but comparatively little about what makes her – her family history, identity, and diaspora. 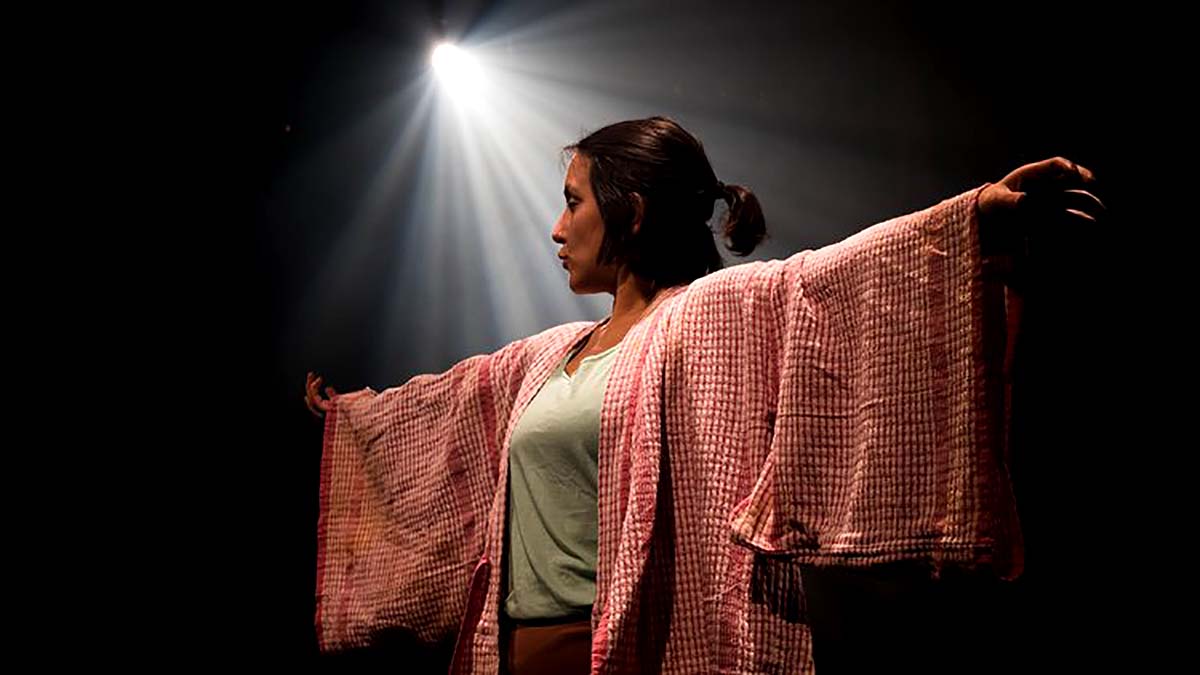 Just shy of one hour, Eating Yourself moves at a balanced pace. Pepa gradually progresses from avoiding all social events after 2pm (so she needn’t carry around three Tupperwares of leftovers) to her final proclamation that ‘food is a gift, an excuse to spend time with those you love.’ I could have watched Pepa herself perform for hours more, but the existing content – especially about eating disorders – was already hard enough to stomach.

Swiping her eyes once at the performance’s close, I have never witnessed such emotional, nor gracious, acceptance of applause. Sharing her stories and her soup, she began ladling out portions to the waiting queue of audience members. (Vulnerable to the final moment, she admitted she’d slightly undercooked the potato this time). 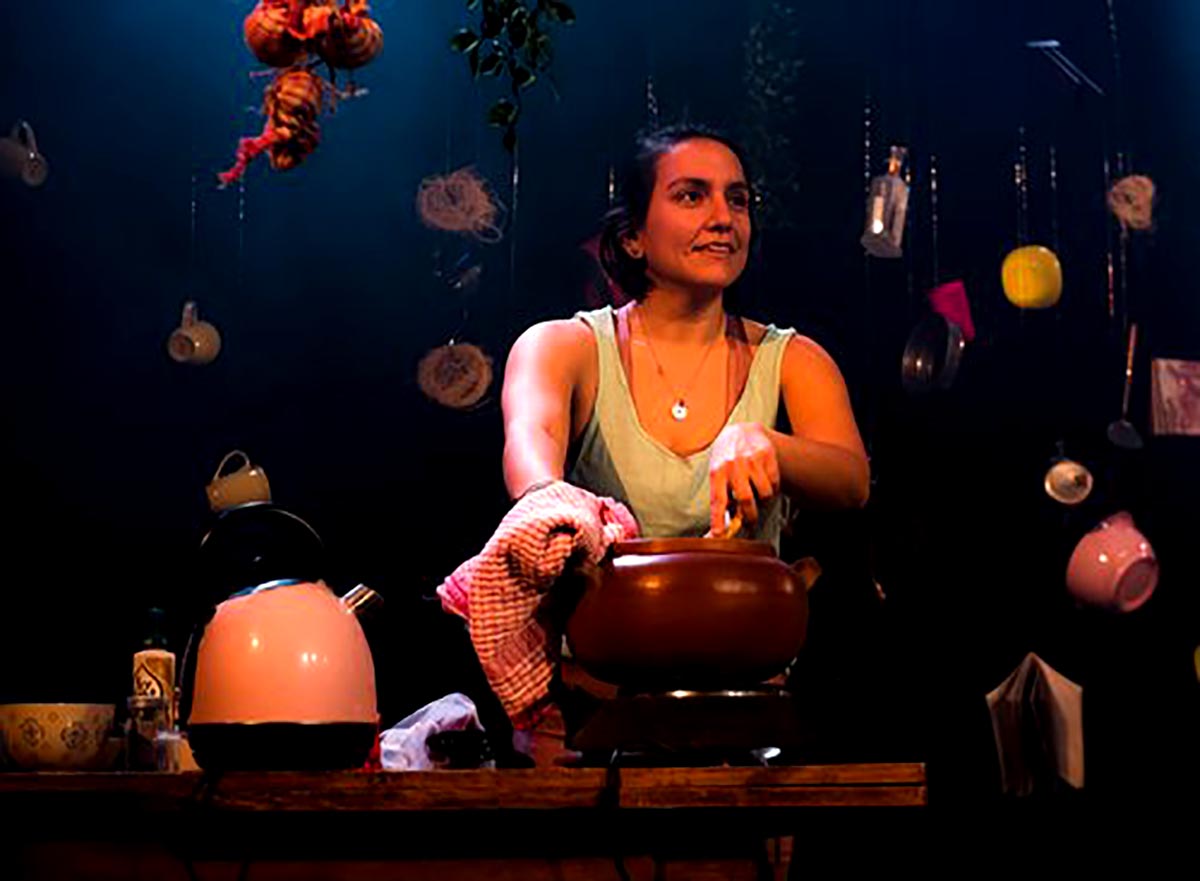 A vegetarian, like Pepa’s mother, I was forced to trust the contented sounds coming from the crowd. Still, I couldn’t ever leave Eating Myself unfulfilled.

Eating Myself was at Theatre Peckham, as part of Peckham Fringe, between 16th and 17th May 2022. Images The Rose Collective.

Read More »
PrevPreviousToreadors Bring the Enduring Appeal of Bizet’s Carmen to Glasgow Royal Concert Hall
NextSparkle is the Name of the Game at King’s Theatre, GlasgowNext