Although a small exhibition, this is a nonetheless ambitious display in terms of its scope and variety of work, from about forty artists, from Scotland, the UK and overseas. Furthermore, the theme of connection (hence ‘threads’) works in a complexity of directions: the majority of works are by women, with something to express about their place in the world, their experiences, relationships, environment, country and culture.

It’s fitting, then, to include a series of free workshops on International Women’s Day (8th March), bringing some of the exhibiting artists together with other participants to learn, connect and share through discussion. I arrived at the gallery while a workshop with writing consultant Lesley Macniven was underway, and the friendly Lesley invited me to join the group; I spent the rest of the afternoon in an open, relaxed creative atmosphere with ten others. In line with the art on display, the emphasis was on our personal responses to the world, to art and poetry, to our own selves and to each other’s writing.

The art works (a wide-ranging mixture of painting, textile, drawing and other media) are all accompanied by a short piece of wording by each artist. Explanatory wording is often an interesting question: just how much information do we need to appreciate the work – should it speak for itself, or is it always illuminating to have the themes in and behind the piece explained? In every artwork here, the latter is very much the case, leading to a much richer experience when you understand each artist’s involvement in their work: this is a very personal exhibition.

In many cases, the ‘threads’ that we are encouraged to find at first seem only visible as a physical component of the works for instance in Laura T James’ When My Thoughts Turn to Thread, Caroline Millar’s Tatters, and Kasia Osga’s Mirror Image. Other works use thread representationally such as Shân Monteith-Mann’s Closed Island Kelp, whose strands of sea kelp represent life’s twists and turns. But, as we take in piece after piece, a more collective aspect becomes clear, unifying themes emerge, and the idea of thread as a connection takes shape – between the artists’ personal worlds, the world you bring along as a viewer, and the wider world.

Some works bring both literal threads and threads of life-experience together skilfully, for example Morag Young’s Fortitude, which conveys in mixed media (including fabric) the richness of her cultural background of fishing and crofting. Denis Houlihan’s Hera evokes the theme of persisting gender inequality by drawing on mythology with a dense painterly power, and Nicola Weir’s work is her response to ancient botanic wisdom, with real flowers and their properties annotated; Mary Rouncefield’s Campaign Boots displays logos and artwork from political campaigns in which women have participated. The works on display are so varied that it is more the underlying themes that connect them, rather than any common aesthetic, and an additional connection is made when we identify with these themes.

Several months in the making, the exhibition is an eclectic and rich assembly of highly expressive, personal works that, by giving much up to us, make us leave feeling nurtured and supported. Put together by the collective The Artists’ Pool, it runs until 16th March, with support going to Dravet Syndrome UK. 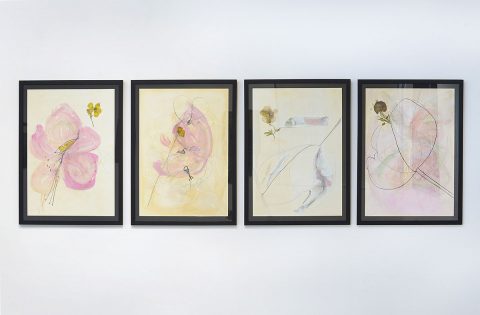