Slugtown, 22 Lesbury Road, Heaton, Newcastle upon Tyne
Continues until March 17
By appointment only

On a quiet residential street, three Metro stops and a bit of a walk from Newcastle City Centre, a new gallery has opened. Slugtown is the latest project by members of artists collective MILK, who since forming in 2015 have staged a take over of Workplace Gallery, put on pop-up shows in a cavernous empty shop in Byker, and got a Trojan Horse into the Laing Art Gallery (sort of).

The group formed in response to their perceived lack of opportunities for early career artists to show their work. The connections the group have already developed, combined with this new, and hopefully permanent, exhibition space go a long way to meeting their goals. The list of artists they have shown work by is already rather lengthy.

The inaugural exhibition at Slugtown features a modest selection of David Donald’s paintings, drawings and sculpture, all playing on the idea of novelty in fashion and advertising. A flyswatter designed for Barbie hanging in the hallway neatly sums up the idea.

The evening of the preview was cold, wet and dark, making the light from Slugtown’s vast bay windows radiate into the street. Walking up the drive way, only discrete vinyl lettering identifies where you are. But then, those great windows do all the work. Looking into the pristine white interior, the clinical pallet and industrial wooden floor seem out of place next to the homely soft furnishings of the neighbouring houses. It’s all quite exciting. 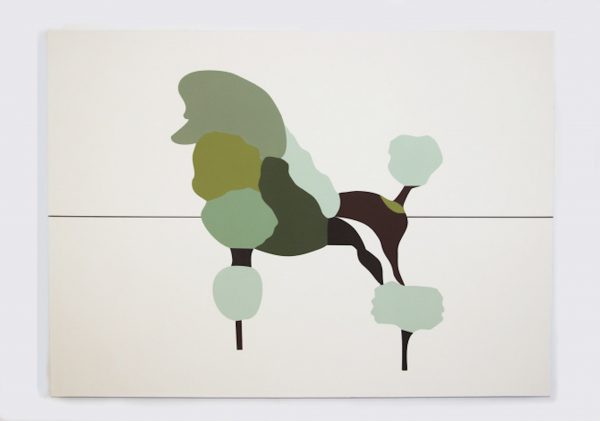 Iconic design is the foundation of Donald’s painting. They explore how images are repurposed across generations, such as the transformation of Mondrian’s paintings from the 1920s de Stijl movement to being used in 1960s fashion. Recent paintings use the outline of t-shirts to bring this idea full-circle, using the universal form to promote advertising of the individual. Unlike mass-produced adverts however, these paintings are meticulously hand-made. The subvert the notion of painting as an expressive medium, celebrating the graphic quality of the images and rejecting depth or perspective.

à la mode is David Donald’s first solo exhibition in Newcastle. He has taken part in group exhibitions in Helsinki, Rome, and London, and graduated from the Slade School of Art in 2016. The exhibition at Slugtown is open by appointment only, which can be arrange by contacting info@slugtown.co.uk.