BUDAPEST HAS ART COLLECTIONS TO MATCH MOST EUROPEAN CAPITALS

One of the world’s finest national galleries in one of the finest buildings ever to host one. A cutting edge contemporary art museum which took root even before regime change. A photography gallery dedicated to one of the world’s most famous cameramen. One of Europe’s longest established museums of applied art in a fabulous, Secessionist-style landmark building. Art and design-led cafes to relax in when the gallery-hopping day is over. All this and value for money too makes Budapest a great city break destination for art-lovers.

Reached by funicular from Adam Clark Square (named after the Scottish designer of the nearby Chain Bridge, the city’s iconic Danube crossing) the Hungarian National Gallery is housed in the magnificent Royal Palace, also known as Buda Castle. The beautifully displayed, 100,000-piece collection provides a comprehensive overview of the history of fine art in Hungary, from late medieval wooden sculptures and panel paintings to Hungarian art after 1945. The many highlights include some of the best known examples of Hungarian landscape and portraiture produced during Hungary’s 19th century Romantic period, fully intact winged altarpieces and masterpieces from the Museum of Fine Arts, which are temporarily showing while that gallery is being renovated. There is also a series of special exhibitions. Added bonus: an expansive terrace with panoramic views of Pest and the Danube. You’ll want to go back.

The Ludwig Museum, or LuMu, is the city’s main showcase for contemporary art. Established in 1989 (before the regime change) by the German chocolate magnate Peter Ludwig and his wife Irene, who amassed possibly the world’s largest private collection of late 20th century art, LuMu is associated with ten or so museums all over Europe, including Cologne, Vienna and St Petersburg. In 2005 it moved to its new home in the Palace of Arts, a modern complex by the Danube which also houses the Bela Bartok National Concert Hall and the Festival Theatre. With over 500 pieces, LuMu has the largest collection of contemporary art in Hungary, tracing the history of the genre in Hungary and Eastern Europe in the last quarter century through permanent displays and temporary exhibitions.
One the most impressive buildings in a city full of them is the Museum of Applied Arts, a Secessionist-style landmark and a work of art in itself. Established in 1872, making it the third such institution in Europe after Vienna and London, its green, ceramic-tiled dome and rooftops soar above walls covered with motifs and patterns from Moorish and Indian designs and Hungarian folk culture, while the snow-white interior in oriental style is topped off with a gorgeous, stained glass skylight soaring above the central Glass Hall. The collection of over 100,000 items spans the history of objects from the Middle Ages to contemporary design and includes porcelain, furniture, glass, precious metal, figurines, fans, lace, carved objects, oriental carpets and tapestries. Many world famous makers are represented, such as Meissen, Murano, Minton, Thomas Webb and Limoges.
In the riverside Balna Warehouse, a curvaceous, glass-encased mall known locally as “the Whale”, the city-run New Budapest Gallery, which specialises in contemporary art. is one of the largest galleries in the city. See also Obuda – Budapest Gallery.
Directly opposite the Museum of Fine Art (currently closed for renovation) on Heroes’ Square, the Palace of Arts makes up for its lack of a permanent collection of its own with a vibrant exhibition programme of contemporary Hungarian and international art in contrast to its traditional neighbour across the way – although its beautiful, neoclassical columns might suggest otherwise. It boasts 2,000 square metres of exhibition space, including the glass-roofed main gallery, as well as two project rooms, and it hosts the autumn Budapest Art Fair.

It’s worth a tram ride out to this eastern part of the city, where Roman ruins, including the remains of an amphitheatre with an arena bigger than the Colosseum, attest to its being the site of the original settlement. You’ll also find a clutch of galleries and museums, including one devoted to a world famous name.

Spread over two floors in the former storehouse of the Baroque Zichy Manor, a former count’s residence, the Vasarely Museum has some 400 works by the Hungarian-born father of op (optical) art, Victor Vasarely (1906-97), whose dizzying kinetic reliefs in plexiglass continue to bamboozle viewers. (Note: The museum is closed until November for renovation.)

Nearby the Budapest Gallery is a city-run, non-profit gallery presenting a broad range of contemporary Hungarian art, including works of an architectural nature, photography, applied arts and design, often by first-time exhibitors. There is an artist exchange programme with numerous European cities. See also New Budapest Gallery.

In the back of a cafe in the local cultural centre, the Esernyos Gallery is a new, one-room space showing work by young Hungarian artists with the concept of redefining everyday objects and situations.

Around the corner is a real find. The Imre Varga Collection has over 130 works by Hungary’s foremost sculptor. Now aged 93, he still works and, if you visit on a Saturday, you may meet the great man himself. On the way to the museum, which is stuffed with examples of Varga’s prodigious output, you will pass his ‘Those Waiting’, a group of bronze figures holding umbrellas. Varga also has some 300 pieces dotted around the world, including a sculpture in Tel Aviv of the Swedish diplomat Raoul Wallenberg (who helped save thousands of Hungarian Jews from the gas chambers), a sculpture of the Hungarian composer Bela Bartok in Brussels, a seven-metre high Prometheus in Antwerp and three gilded panels in the Hungarian Chapel of our Lady in the Vatican.
On the hill overlooking Obuda and the Danube, the Kiscelli Museum, located in a former Baroque monastery and church, has a collection of Hungarian art from about 1880 to 1990. Atmospherically displayed under vaulted ceilings, it includes silverware, paintings, sculpture, drawings and installations. There is also a quirky collection of historical artefacts. The vast former church with its bare brick walls (thanks to WWII Allied bombing) is now used as a dramatic exhibition and concert space and is rented out as a film set. New exhibition spaces are planned as part of a major refurbishment, including three underground levels.

The Book Cafe is a wholly inadequate name for one of Budapest’s most opulent settings for a refreshment or light bite. Located on Andrassy Avenue, it is on the upper floor of an Art 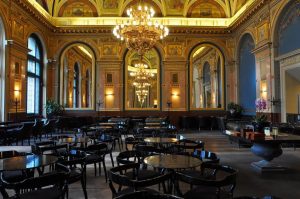 Nouveau building opened in 1881 as a casino and later transformed into a luxury department store. Today it is a book emporium. The room was once the Lotz Hall, the former casino ballroom which became the store’s auction house for furniture, ceramics, antiques and contemporary art of the time. Now you can sit under chandeliers and marvel at the magnificent frescoes. In summer, the 360 Bar is the highest rooftop watering-hole in the city. Check out the video at www.parisi.hu.

If Bauhaus is your style, head for Erzsebet Square in the heart of the central business district, where you will find the Terminal Restaurant and Bar, a beautifully restored Bauhaus building which was previously a bus terminal.

Photography fans will want to check out two galleries in Art Nouveau buildings within a short walk of one another on opposite sides of the elegant Andrassy Avenue. In the former 19th century residence of the court photographer after whom it is named, the Mai Mano House showcases Hungarian and international photographic art, while the Robert Capa Contemporary Photography Center hosts changing exhibitions, although curiously none by Capa himself. Budapest-born, Capa (real name Endre Friedmann) is famous for his Spanish Civil War images and for being the only photographer to take part in the D-Day landings. 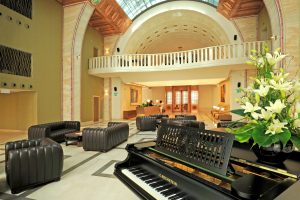 The historic, 272-room Continental Hotel Budapest first opened in 1910 as part of the Hungaria Baths. A major makeover has combined contemporary design with art nouveau, Secessionist-style details, including an imposing entrance and glass cupula, complemented by paintings by the Hungarian artist Levente Baranyai – all topped off with the largest roof-top wellness and fitness centre in Budapest with panoramic views.