From Greek trading post to Roman colony to early Christian metropolis to rich agricultural centre from the Middle Ages to the Renaissance to the capital of the Camargue at the head of the Rhone delta, Arles is one of the jewels of Provence.

A stroll through Arles’ historic town centre, a UNESCO World Heritage Site, is like stepping into the past, with alleyways rubbed smooth under Roman sandals and centuries of architectural styles seeming to grow organically into one another – and all nestled around a magnificent amphitheatre.

Artistically, Arles will forever be linked with Vincent Van Gogh, whose spirit permeates this charming town. The Dutch artist travelled to Provence in February 1888 in search of “a different light”, and the fifteen month he spent there proved to be the most prolific period of his life, when he produced over 300 paintings and drawings, many of which are now among his best known works.

On the Van Gogh Walking Tour visitors can stop at several spots where the artist set up his easel. Marked with large panels with illustrations of his paintings, they include: ‘Cafe terrace at night’ in the Place du Forum (today the site of the Van Gogh-themed Cafe de la Nuit); the river embankment where he painted ‘Starry night over the Rhone’; the Place Lamartine, location of ‘The Yellow House’ (destroyed in 1944 by Allied bombers targeting a nearby bridge over the river); ‘Entrance to the public garden’ (today Le jardin d’été, or Summer Garden); and ‘Garden of the hospital at Arles’, now in the Espace Van Gogh.

The former the Holy Spirit hospital is where Van Gogh’s dream of establishing a community of artists, or a “workshop of the south”, came to an abrupt end. Driven to despair by mental illness, and seeing his hopes of an artists’ colony dashed by the departure after much bickering of fellow artist Paul Gauguin, Van Gogh was treated at the hospital after slicing his ear. He subsequently committed himself to an asylum at Saint-Rémy, thus ending his Arles sojourn.

Today renamed the Espace Van Gogh, the complex is built around a courtyard garden which has been replanted according to Van Gogh’s 1889 painting of it and the buildings now house the city’s multi-media library, university classrooms and an exhibition space showcasing emerging artists.

While Arles has no museum dedicated to Van Gogh or even one of his works on permanent display, the Vincent Van Gogh Foundation comes closest. This modern, private gallery pays homage to Van Gogh’s legacy by exploring its impact on modern and contemporary artists through a series of exhibitions of their work. Previous shows have included Van Gogh-inspired pieces such as a Hockney chair and a Rauschenberg acrylic sunflower. A few original Van Gogh paintings and drawings on loan from international museums appear alongside the modern works.

Van Gogh, however, is not the only attraction in town for art-lovers.

Just as Canadian-American architect Frank Gehry is credited with rejuvenating the ailing port city of Bilbao in northern Spain with the 1997 opening of the Guggenheim Museum, hopes are high that one of his latest projects will also have “the Bilbao effect”.

Due to open in 2020, Luma Arles is a multi-disciplinary arts complex established by the Swiss collector and pharmaceutical heiress Maja Hoffmann, who grew up in the city. Gehry’s design for the twisting tower clad in reflective aluminium panels was inspired by the craggy Les Alpilles hills northeast of Arles. The irregularly placed tiles echo Van Gogh’s Impressionist brushstrokes as he rendered the rock formations in 1888, while a vast circular glass atrium recalls the nearby Roman amphitheatre. With each panel reflecting the light differently, the building changes appearance as one moves around it. The effect is further enhanced by hues changing throughout the day.

The centrepiece of the 20-acre site of a former railyard, the tower will accommodate artists and designers in residence in working studios, where they will be encouraged to develop innovative projects. The two top floors will host gastronomic ‘experiments’, while the ground floor will be a free to enter public space. Several former industrial buildings have already been converted into gallery spaces, such as La Grande Halle. With its metal lace facade to let in natural light, it hosts special exhibitions, such as the Gilbert & George 2018 show to celebrate the 50th anniversary of their partnership. The site will also feature a public garden called the Parc des Ateliers.

While the Luma complex is the newest cultural attraction in Arles, directly behind it is one of its oldest. Les Alyscamps is an eerily beautiful avenue of pre-Christian tombs as atmospheric today as when Van Gogh painted it in 1888. The name is Provencal for the Champs Elysees, or Elysian Fields, Homer’s Underworld paradise for heroes.

Housed in the 15th century Great Priory of the Knights of Malta, the Musée Réattu is dedicated to its founder, the prolific neo-Classical painter and collector Jacques Réattu (1760-1833), a native of Arles whose studio was in the building and who bequeathed many of this works to the city.

Converted into a museum in 1868, it exhibits works from the 17th to the 19th centuries. Notable in the collection are 57 drawings by Picasso from 1971 that he donated to the museum following his second exhibition there (thus creating one of the first public collections dedicated to the artist) as well as works by modern artists such as Leger, Dufy, Gauguin and others. Picasso’s 1937 painting of Lee Miller as an Arlesienne is another highlight. 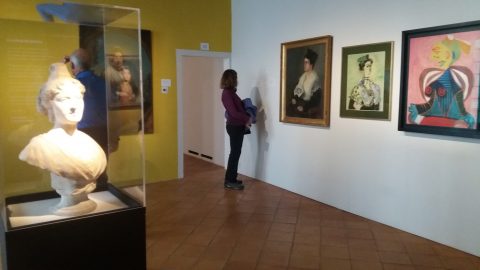 In 1965 the Musée Réattu became the first fine arts museum museum in France to add a photography collection, which now comprises some 4,000 works by the likes of Richard Avedon, Robert Doisneau, Dora Maar, Man Ray, Edward Weston, Brassaï, Henri Cartier-Bresson and others. The eclectic selection extends to sculpture, video works, sketches of fashion designs donated by Arles-born Christian Lacroix and a sound art section. The museum also boasts the only original trace of Van Gogh’s stay in Arles – a letter from the artist to Paul Gauguin. A bonus: Sweeping views of the Rhone from its upper floors.

Arles also has a long-standing reputation as a centre of photography. The highly respected National Photography School is about to move into new, custom-built premises across the road from Luma, while Les Rencontres d’Arles, an annual summer photography festival, occupies spaces throughout the city (Jun 29-Sep 20, 2020).