The Belgian city of Gent is celebrating the restoration of the most famous artwork by one of the greatest Flemish Masters.

Van Eyck – An Optical Revolution brings together brings together 13 of the 23 works confidently attributed to him and dating between 1432 and 1439. Also showing are other works from his atelier and copies of lost Van Eycks. These are accompanied by over a hundred works by some of Van Eyck’s most talented contemporaries, including miniatures, drawings, sculptures and illuminated manuscripts. Together they reveal how the period was a turning point in western painting.

Jan Van Eyck (c.1390-1441) was Europe’s most famous artist during his lifetime. So revolutionary was his work that after his death the myth arose that he invented oil painting. While this is untrue, we can nevertheless speak of ‘before’ and ‘after’ Van Eyck.

Referring to Van Eyck’s impact on the art world, Professor Maximiliaan Martens of the Art History department at Gent University and Co-Curator of the MSK exhibition, told some 120 journalist from all Europe at a press preview: “It seems as though a comet appears across the sky of 1430s European culture.”

He was the first artist to add thickeners to his paint, which made it dry faster and enabled him to work more quickly. At the same time he introduced a glacé technique which gave the work a silky transparency and a sense of heightened reality – in modern parlance, a 3D effect.

Secondly, Van Eyck had extraordinary hand-eye coordination and hitherto unseen powers of observation, which enabled him to paint exactly what he saw in extraordinary detail never seen before. This is evident in tiny touches such as individual hairs on Adam’s legs in his most famous work, the Gent Altarpiece, a delicate spider’s web in a high corner behind a portrait sitter or a raised artery on a horse’s neck. So realistic are some of his portrait sitters that they seem to be about to step out of their frames.

Thirdly, Van Eyck was the first learned painter in northern Europe in that he understood the ocular system from a scientific point of view and how light – and shade – define what the eye sees. He also had knowledge of more complex phenomena such as reflections and distortions. His sponsor, the Duke of Burgundy, wrote about Van Eyck’s unique combination of art and science, while another observer noted his command of geometry and novel use of perspective.

At the heart of Van Eyck – An Optical Revolution are eight restored panels of Van Eyck’s most famous work, ‘The Adoration of the Mystic Lamb’, commonly known as the Gent Altarpiece. Arguably the most influential painting in history, the 20-panel polyptych painted on oak depicts Bible stories. What the ‘Mona Lisa’ is to Paris, the altarpiece is to Gent. (The altarpiece is also at the heart of the film Monuments Men, in which George Clooney “rescues” it from an Austrian saltmine after it was looted by the Nazis.)

First unveiled on May 6, 1432 (coincidentally, Mr Clooney’s birthday – the date, that is, not the year), the altarpiece stems from a period when most believers were illiterate and visual representations of biblical stories were an important tool to engage church-goers – the more impressive, the better. In this case, the contrast between the rather sombre outer panels, which fold out and back, and the colourful inner panels symbolises worldly reality making way for the majesty of heaven.

The actual creation of the altarpiece is something of a mystery. It is known that Jan’s brother Hubert, also an artist, was first commissioned to paint it and may or may not have been involved in the early stages before his death. Certainly, Jan completed it, while another brother, Lambert, as well as a sister (the entire Van Eyck family, including the father, were artists) may also have had a hand in it.

The exhibition features the restored panels of the altarpiece seen when closed as well as the Adam and Eve outer panels, shown for the first time outside their original home, Gent’s St Bavo’s Cathedral. Displayed at eye level, this is the first and last time visitors can come so close to them. 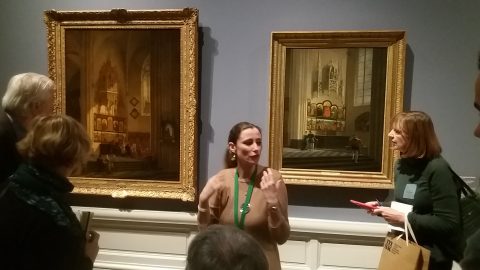 Paintings by Van Eyck are rarely allowed to leave the museums which hold them, making the number of the loans from international institutions a once in a lifetime occurrence. Some museums have taken the opportunity to restore their own works, so that the public can see them in their original condition.

Lenders include the British Library, Victoria and Albert Museum and National Gallery in London, the Rijksmuseum in Amsterdam, the Uffizi Gallery in Florence, the Prado in Madrid, the Metropolitan Museum of Art in New York, the Louvre in Paris, the National Gallery of Art in Washington, D.C. and the Albertina in Vienna as well as private collectors.

Restoration of the Gent Altarpiece began in 2012 in a specially created sound- and bullet-proof studio in the MSK, where visitors can view the restorers at work on weekdays. During the process it was discovered that around 70 per cent of the work had been over-painted or varnished in subsequent years, meaning that initially the restorers were hardly looking at a Van Eyck at all. The restoration has also provided a new insight into Van Eyck’s process. For more more information on the restoration process go to Closer to Van Eyck.

The partially restored work, which measures over three metres by four metres, will be unveiled in St Bavo’s Cathedral on October 8 this year in a new visitor centre. Augmented reality glasses will enable visitors to time-travel back to Van Eyck’s time and even visit his studio. The altarpiece will be closed twice a day so that visitors can view the art on the reverse side of the panels.

After a few months, the top half will be replaced by a copy and the original removed for several more years’ of restoration, which is expected to be completed in 2024. However, it is questionable whether the entire original will ever be seen again. Two outer panels were stolen in 1934 and one of them, the Just Judges, has never been found.

Van Eyck – An Optical Revolution marks the start of a city-wide festival in Gent, OMG! Van Eyck Was Here, the third in a series of annual theme years in Belgium entitled Flemish Masters, which has already focused on Rubens and Bruegel.

OMG! will feature a range of Van Eyck-inspired events, including a multi-media spectacle, a new choral work by the Estonian composer Arvo Pärt and a tour of specially commissioned street art. Local craftmakers will produce Van Eyck-inspired works, a famous Flemish chef will devise contemporary recipes with historical ingredients and even a master chocolatier will produce hand-made Van Eyck treats.