Every now and again, you become obsessed with a painting. It will draw your attention and hold you transfixed. You will pore over the surface texture, scrutinise the brush strokes, feast on the colours. You will close your eyes and see it like it was hanging right in front of you. This happened to me for the first time while I was an assistant at University Gallery, Northumbria University, installing an exhibition by the late Scottish painter Alan Davie.

‘Golden Drummer Boy’, 1962, was over eight feet wide, but I can still recall every inch. Since then, I’ve sought out Davie’s work where ever I could, and this week I was thrilled to visit 108 Fine Art in Harrogate. They have held regular exhibitions since 2006 and hold a stunning body of work. The small selection currently on display spans Davie’s whole career, from the monumental canvases of the late 1950s to more modest oil on boards executed when Davie was in his nineties, all available for sale. 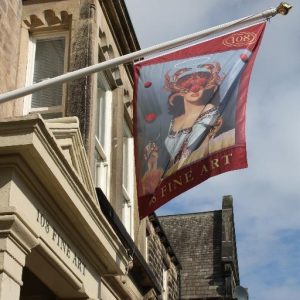 Closer to home, Newcastle University’s Hatton Gallery, currently closed for refurbishent after securing a major National Lottery grant, has a fantastic example of Davie’s early work in its permanent collection. ‘Yellow Pool Pull’, 1959, sings with its lyrical splashes and drips dancing across the thick, bright surface. It’s often included in group exhibitions celebrating the collection, and well worth keeping an eye out for.

The National Galleries of Scotland have a more extensive collection, including a very early portrait drawing, demonstrating Davie’s skill as a draughtsman. Only one painting is currently on display in Modern Two, ‘Study for a Figure Mask, No. 24’, from 1977. Feathers, moons and rainbows float in the sky above a tribal figure and decorated horse, showing Davie’s life-long fascination with art from Africa, North America and India.

Davie was also a celebrated printmaker, producing lithographs and etchings throughout his career. In 2003 he collaborated with master printer Alfons Bytautas at Edinburgh Printmakers, producing a suite of etchings using innovative photo-polymer techniques. These intricate prints show the importance of intuition and spontaneity in Davie’s drawing practice, filling the page with patterns, words and shapes.

Alan Davie was born in Grangemouth in 1920, and studied at Edinburgh College of Art in the late 1930s. His work is held in public and private collections around the world.