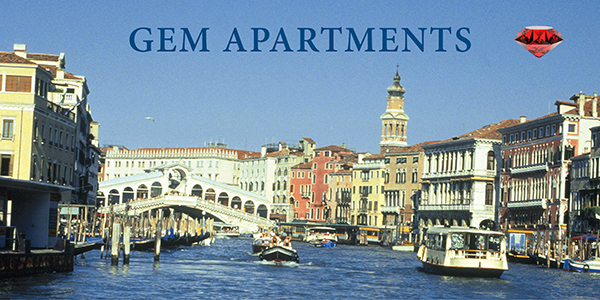 Established in 1895 to promote Italian art and interrupted only for six years during WWII, the Venice Biennale is the largest gathering of its kind in the world. This year marks its 58th edition.

Under this year’s theme May You Live In Interesting Times, almost 90 nations are represented in the Giardini (Gardens), the original, picturesque site with permanent ‘official’ pavilions designed by the likes of Gerrit Rietveld (Netherlands) and Alvar Aalto (Finland).

These presentations are accompanied by a huge mixed exhibition in the Central Pavilion by this year’s guest curator Ralph Rugoff, director of London’s Hayward Gallery. Think an Olympic Park for art.

Rugoff has assembled 80 artists and collectives and installed their work both in the Giardini and in the Arsenale, the great 16th century shipyard where the Venetian empire built its fleet. Normally closed to the public, this is a rare chance to see inside the sprawling site. It’s so big that golf carts are available to the footsore.

In addition, dozens of ‘collateral’ events, from museum quality exhibitions to pop-up shows, are dotted around the city in deconsecrated churches, palaces, courtyards and other buildings. These include 2018 Turner Prize-winner Charlotte Prodger’s presentation for Scotland, ‘SaF05’, the last in her video trilogy. A metaphor for Prodger’s theme of gender fluidity, the title refers to the name researchers have given a maned lioness in Botswana, which is displaying male characteristics.

First-time visitors to the Biennale will be struck at how the lines between art, music, poetry, film, literature, performance, installation, soundscape, text, video, politics and social commentary have been blurred. This is the Turner Prize on steroids.

You’ll also learn that contemporary art isn’t just about looking any more. You also have to be a speed reader. As if it is not confusing enough just viewing some of the pieces and trying to fix their meaning, exhibitors shower you in ‘artspeak’ telling you what you’re seeing. Art, it seems, is now anything claimed to be such by anyone calling themselves an artist.

The typical ‘artist statement’ (is there a more dreaded pairing of words in the English language?) is riddled with gobbledygook. And so you will read about art which ‘illustrates…the contradictions of existence’ (Austria), ‘identifies…the critical answer to the complexity of our age’ (Czech Republic/Slovenia) or ‘presents an other-worldly reflection on the concepts of personal memory, collective memory, history and identity’ (Denmark).

There are screeds of this stuff. Not only will your feet ache, but your eyes too by the time you’re finished. (Is this an admission of failure to communicate in a visual language? And, if so, is it really art?) Best to ignore this mumbo-jumbo and just dive in.

Inevitably, a visit to the Biennale becomes an endurance test. Good intentions to give every contribution a fair look eventually disappear under the sheer scale of it all and making it to the finishing line becomes the main aim. After a while one sign finally causes the heart to soar. It says ‘Cafe’. 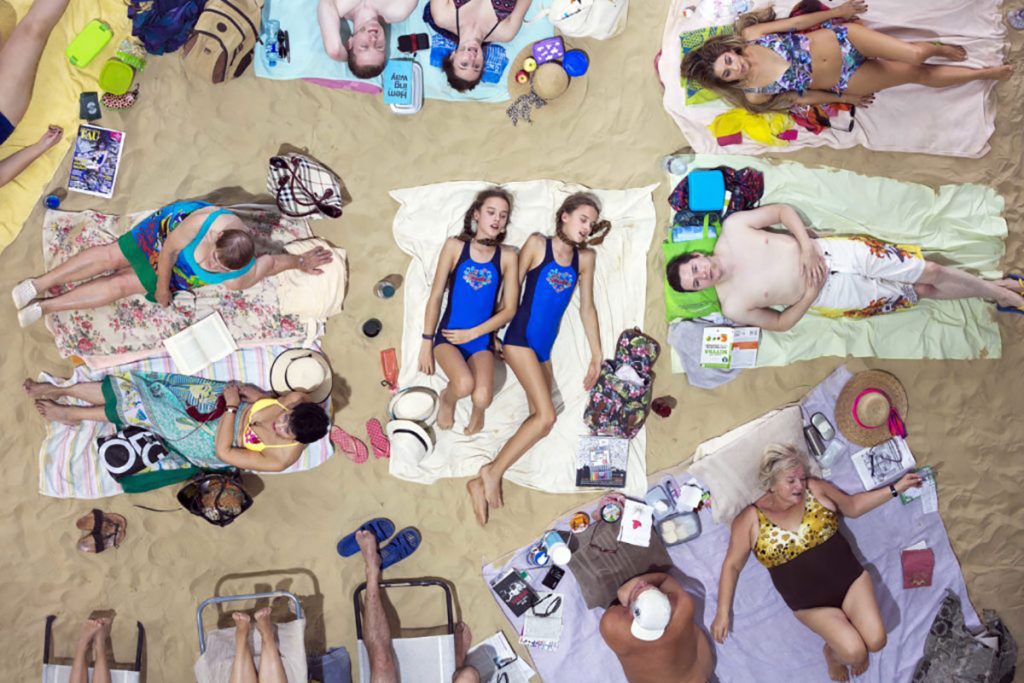 The Golden Lion for Best National Pavilion went to Lithuania, which created a ‘beach’ viewed from a surrounding balcony and peopled by opera-singing sunbathers of all ages complaining about life’s inconveniences. Entitled ‘Sun & Sea (Marina)’, it is a comment on the laziness and self-indulgence which allow climate change and other problems to develop. You can join in any Saturday throughout the Biennale by completing an online application. Just bring a bathing suit, a towel, the kids and even your pets. Wi-fi and reading light provided.

Japan’s Mari Katayama features herself in her photographic work surrounded by hand-made ‘body parts’ replicating those she lost when a rare congenital disorder affecting her shin bones and left hand necessitated amputation at nine years of age.

In 2016 she visited the island of Naoshima, home to an all-female style of ‘bunraku’, the traditional Japanese puppet theatre. She photographed the puppeteers’ hand, printed them on fabric and turned them into wearable soft sculptures to replace her lost limbs. Human hands, she explains “are capable of making anything by changing shapes and sizes”. 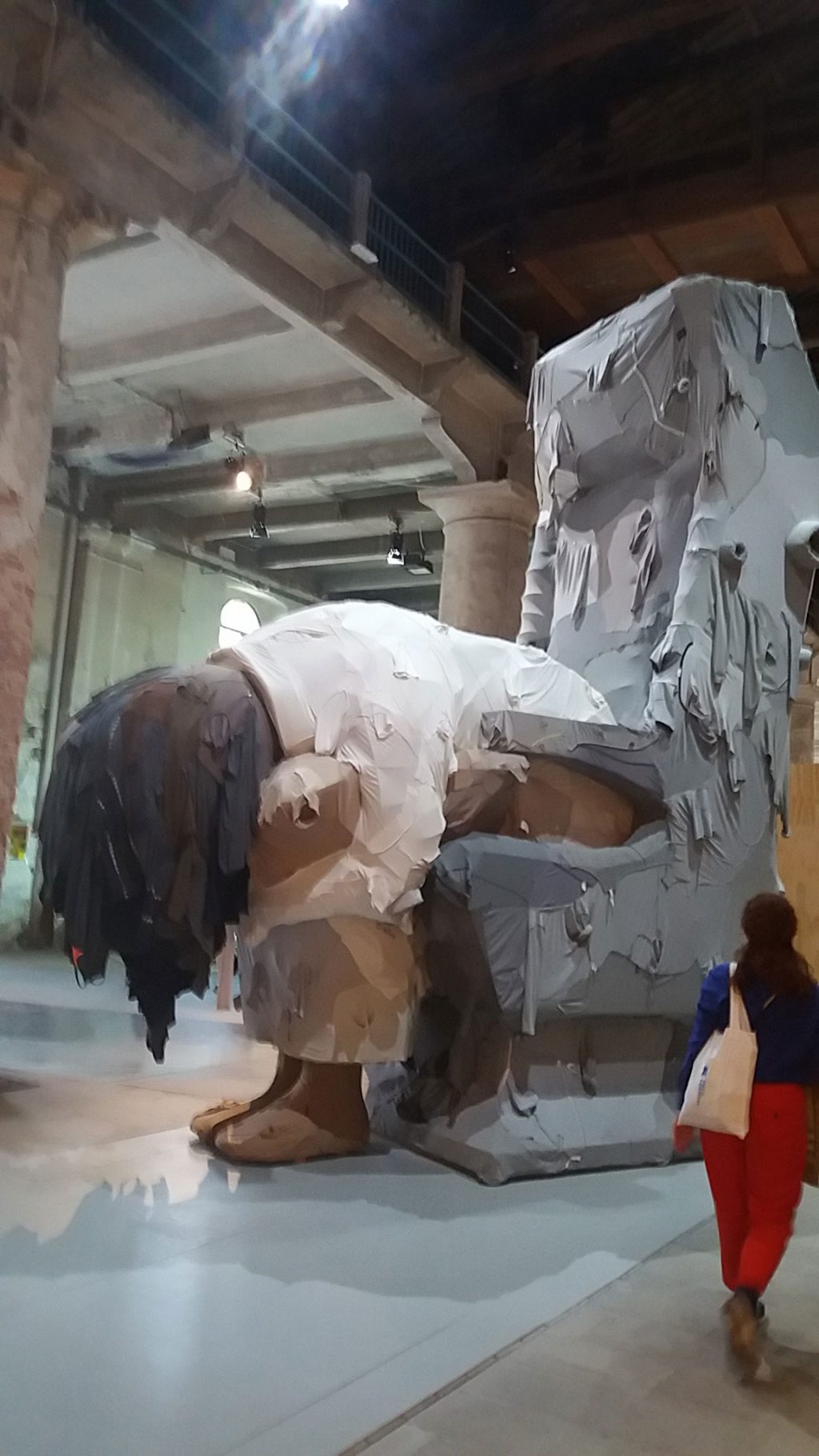 Yin Xiuzhen works with recycled materials to create sculptures reflecting the excessive development and consumption of post-1989 China. ‘Trojan’ (pictured) depicts a passenger in the emergency ‘Brace!’ position in an airplane seat. Hollow and open at the back, you can enter a concealed space evoking a sense of anxiety and perhaps a warning to brace for turbulence ahead 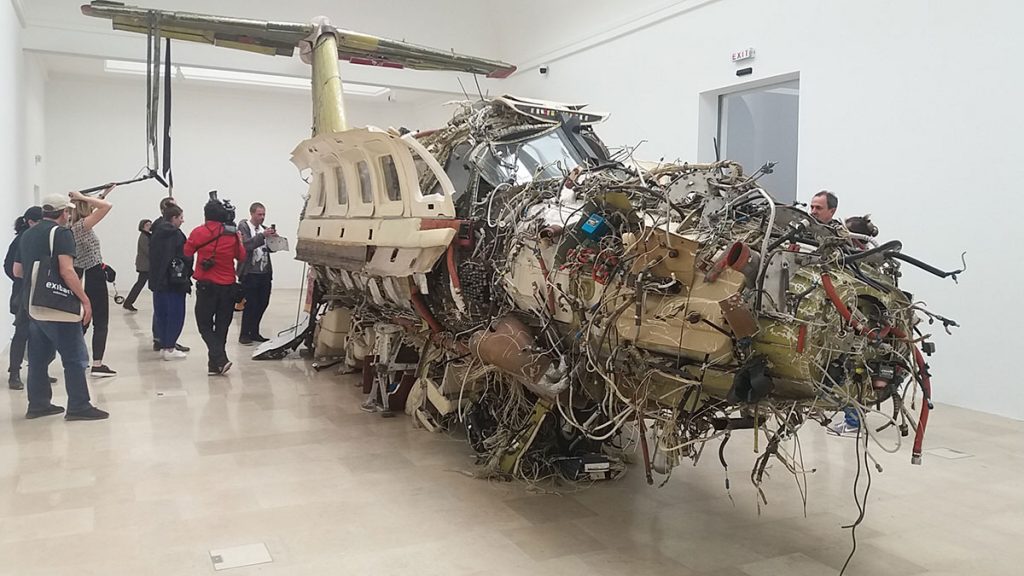 In the Poland pavilion ‘Flight’ by Romana Sta?czak is a monument to his country post-Soviet Union. An aircraft is literally turned inside out, thus revealing what is usually concealed. Says Sta?czak: “Turning things inside out speaks about hope.” 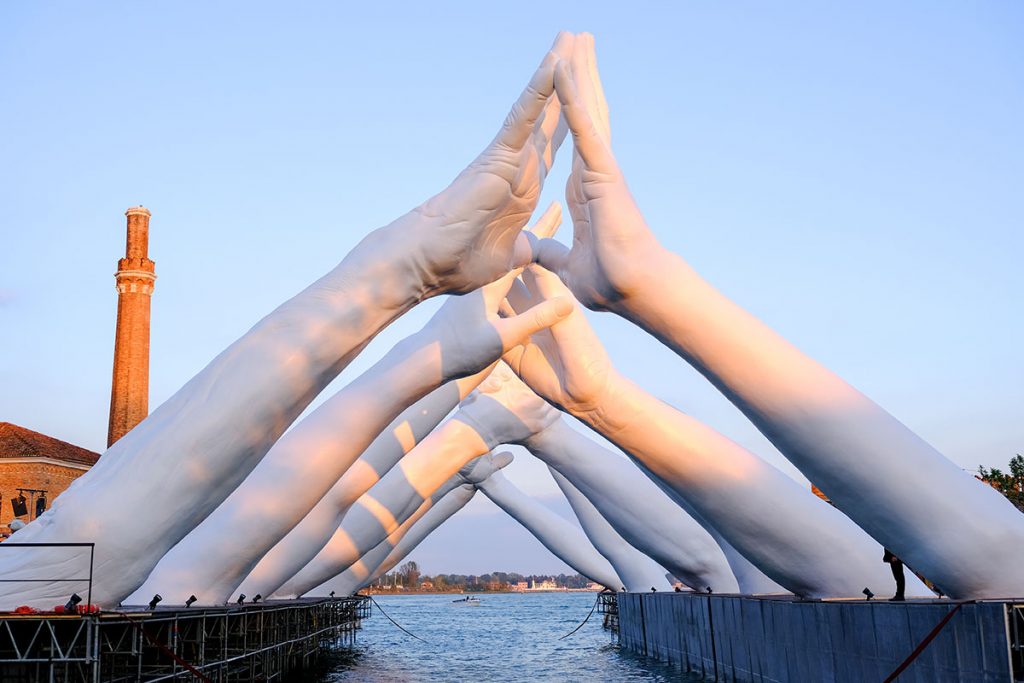 In 2017 Lorenzo Quinn built two giant hands reaching up out of the Grand Canal. This year his ‘Building Bridges’ features not one, but six pairs of hands touching and clasping across the canal entering the Arsenale. It is his largest work to date.

Representing the six values of friendship, wisdom, help, faith, hope and love, the hands symbolise people overcoming their differences. Says Quinn: “Venice is the city of bridges. It is the perfect location to spread a message of world unity.” 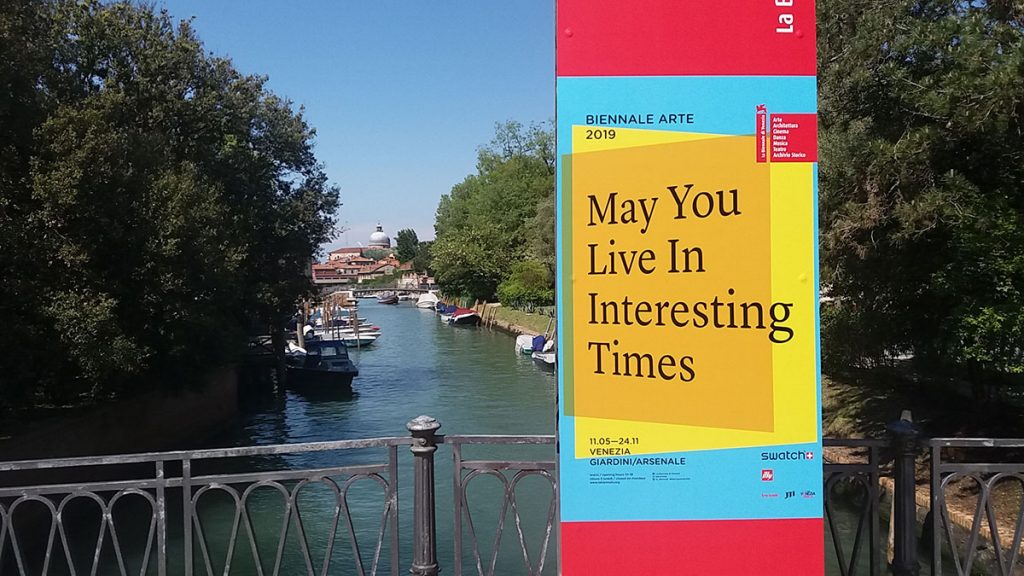